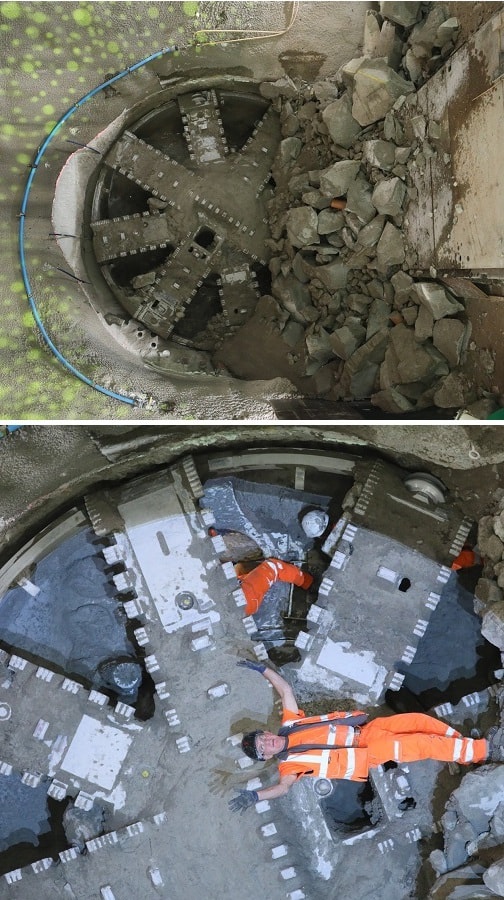 The Northern Line Extension reached a major milestone yesterday with the completion of its tunnelling work.

A huge boring machine broke through its final wall at Kennington, meaning the two 3.2km tunnels to new destinations Battersea Power Station, and Nine Elms, have been built.

Since the spring, two boring machines (affectionately named Helen and Amy) have worked around the clock to create the north and southbound tunnels that will extend the Charing Cross branch of the Northern line.

A map of the new Northern Line branch to Nine Elms and Battersea. (Image credit to TfL)

Transport for London expect the new stations to open in 2020, and it will bring the Battersea and Nine Elms area to within a fifteen minute journey of the City and West End.

Much like the planned Bakerloo Line extension, it will usher in huge regeneration projects in northern areas of Lambeth and Wandsworth, with an expected 20,000 new homes.

___________Triumphant workers celebrate after breaking through last wall beneath Kennington

TfL commissioner Mike Brown said: “I’m delighted to welcome the two tunnelling machines to Kennington after their epic journey. Both machines have had to navigate a challenging, congested path under south London which included sewers, power cables, a Victorian-era well, and existing Victoria and Northern line tunnels. This achievement brings us a significant step closer to the delivery of the first major Tube extension in nearly two decades.”

London mayor Sadiq Khan said: “The Northern Line extension is not only going to make travelling to Battersea and Nine Elms easier, it’s also going to bring tens of thousands of new jobs and homes to the area.”

New homes for who?