BREAKING NEWS LONDON BRIDGE: Police have shot one man, they believe a number of people are injured and are treating it as a ‘terror-related’

Dramatic footage emerged of heroic members of the public appearing to wrestle a man to the ground. 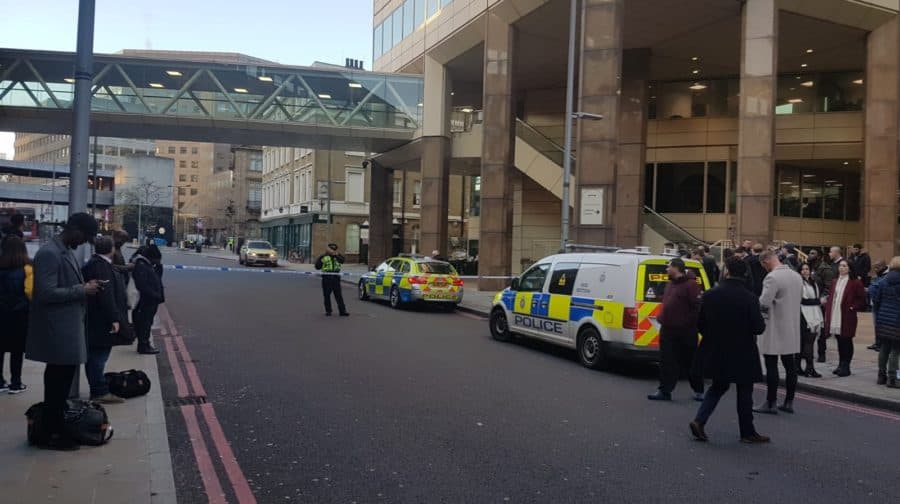 The view at the scene yesterday afternoon

A tweet from the MET said they were called at 1:58pm to a stabbing at a premises near to the bridge.

City of London police and emergency services are in attendance.

Police have confirmed that they have shot one man.

A man who was seen by locals carrying a knife, before a body was seen lying on the ground.

Dramatic footage  has emerged of what appears to be heroic members of the public wrestling a man to the ground. But the police have  now asked nothing is broadcast or published which would identify the police firearms officers involved.

Other footage shows people fleeing the area in horrifying likeness to the terror attacks of June 1017.

Police have said that they have detained a man and that a ‘number of people have been injured’.

A police spokesman said that “a number of people have been stabbed. We will provide further details of those injured when possible.”

At this stage, the circumstances relating to the incident at London Bridge remain unclear. However, as a precaution, they are ‘responding to this incident as though it is terror-related’.

The Mayor of London released this statement: London Bridge remains closed and the station and surrounding buildings in the area have been evacuated.

School have also been on lock-down in Southwark,  St Michael’s College in nearby Bermondsey, nearly two miles from London Bridge sent an email to parents saying:

“I have just been advised by the police to be aware of a serious incident that has just taken place on London Bridge this afternoon.

“There is no direct threat to our safety but they have advised me all students and staff must remain in school until they tell me that it is safe for them travel home, therefore we will be following the college Lockdown procedure and no one will be admitted to the school or allowed to leave until we have received the all clear from the police.”

At this stage, the circumstances relating to the incident at #LondonBridge remain unclear. However, as a precaution, we are currently responding to this incident as though it is terror-related.

One man has been shot by police. We will provide further information when possible.

Police were called at 1:58pm to a stabbing at premises near to London Bridge.

Emergency services attended, including officers from the Met and @CityPolice.

A man has been detained by police. We believe a number of people have been injured. Further info to follow.

Southwark NewsNewsBREAKING NEWS LONDON BRIDGE: Police have shot one man, they believe a number of people are injured and are treating it as a ‘terror-related’