The 22-year-old victim suffered shots to the face and torso, a broken jaw, and remains blinded in one eye 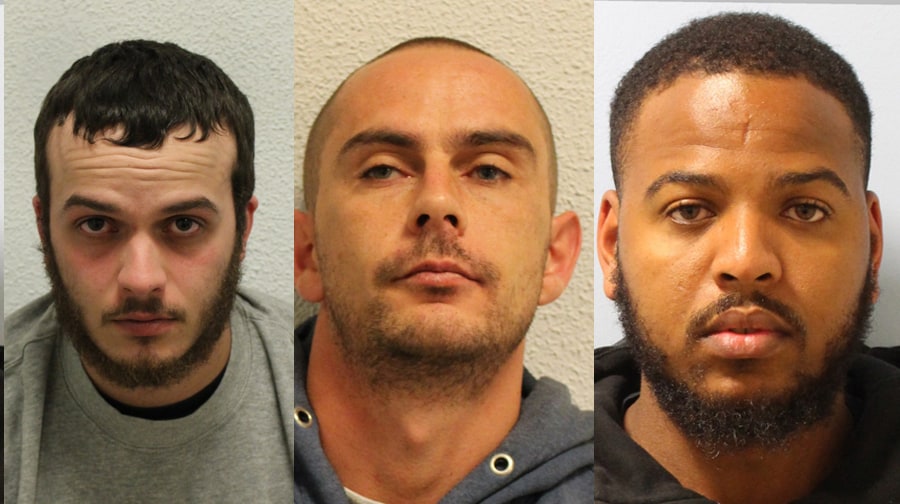 Left to right: Kieron Holt and Ian Ford were sentenced for attempted murder , while Fredrico Charles was jailed for GBH with intent

Three men from Southwark involved in a shooting that left a man partially blinded have been sentenced to a total of 57 years behind bars today.

Ian Ford, 33, of South Bermondsey, was found guilty of attempted murder and possession of a firearm with intent, on Monday March 25. Today he was handed a 25-year jail sentence at the Old Bailey.

Fredrico Charles, 24, of Peckham, was found guilty of GBH with intent on March 26. He was sentenced to eight years behind bars.

The third man, Kieron Holt from Camberwell  – who pleaded guilty in August to attempted murder and possession of a firearm with intent – was also jailed for 24 years.

The court heard that shortly before 8pm on Saturday, June 2 last year, the police were called to Southampton Way to a shooting. In the lead-up to the “brutal attack”, the two victims had been driving along Southampton Way when another vehicle began to pursue them.

It rammed into their car forcing them to stop – before a firearm was pointed out the window and shot at them twice.

The men drove off, leaving the victims wounded. Image: Fredrico Charles was found guilty of GBH with intent by joint enterprise and sentenced to eight years behind bars

One, the driver, 22, suffered shots to the face and torso, a broken jaw, and remains blinded in one eye.

The passenger managed to escape without serious injuries.

CCTV enquiries revealed that Ford and Holt were in the vehicle the shots were fired from. Ford was arrested by armed police on June 7, while Holt was arrested five days later.

Ford, despite not being the shooter, was handed a 25-year sentence by virtue of his contested trial.

Charles, who the court heard helped Ford and Holt in their search in another vehicle then drove off beforehand, so was not at the scene at the time of the shooting, was cleared of attempted murder. He was however found guilty of GBH with intent by joint enterprise on the basis he knew serious harm would come to the victim, but was kept in the dark about the shotgun. He was also not found guilty of any charge of possession of a firearm. Kieron Holt was handed a 24-year jail sentence for his role in the shooting, which left the victim with permanent injuries

Detective Sergeant Jo Ross, who led the case, said: “This was a brutal attack which left one man suffering life changing injuries which he will sadly never recover fully from.

“The victim still requires ongoing medical care as a result of these three men’s callous actions which could have quite easily been fatal.

“It is clear that this trio are very dangerous men who have now been brought to justice and will serve lengthy prison sentences.”