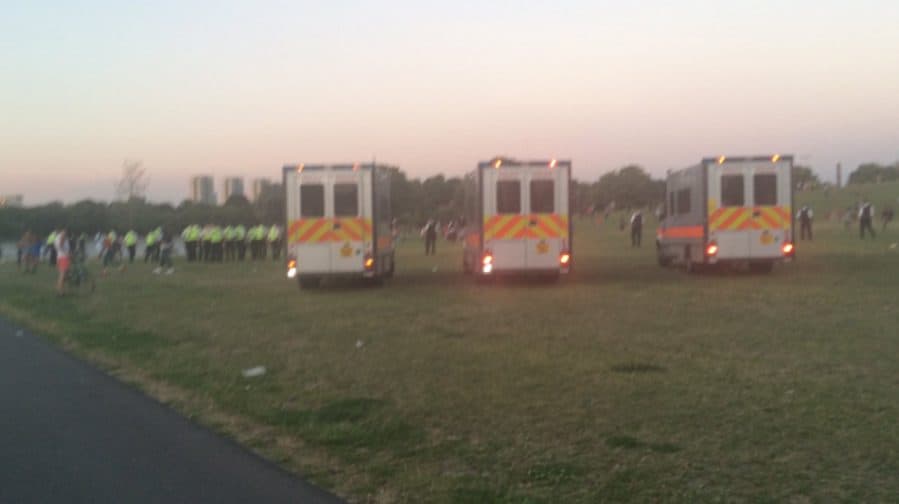 Riot police have been called to Burgess Park to monitor a group  of  youths who eyewitnesses say have been fighting and throwing bottles at coppers.

Police have confirmed two arrests have been made. One of a fifteen-year-old boy in possession of an offensive weapon, and another on a person in relation to breaches of the Public Order Act.

A group of more than 30 young men and women have congregated by the lake, the night after two teenage boys were stabbed in Burgess Park. Reports are also coming in of a police helicopter circling the area.

Police this morning confirmed that last night’s violence was sparked by a water fight organised to celebrate the end of school term. The fun and games turned nasty after small fights got out of hand, triggering a stampede of youths to flee up Albany Road at 9pm. A Tesco supermarket in Old Kent Road was also ransacked by gangs that had sprinted from the park.

Tonight, an eyewitness has described seeing more young men and women squaring up to ranks of police armed with batons and riots vans behind them.

Polly Raven, of Bethwin Road in Camberwell, said: “I just went for a walk through the park at about 8.45pm until 9pm. As I approached the lake I saw loads of teenagers hanging around. They were just having water pistol fights. It looked innocent enough.

“But a fight broke out on the other side of the lake and it sounded quite aggressive.

“The police in the park ran over to break it up, and it looked like they called for back-up.

“The group of youths started running straight at the police. The police got out their batons, then the youths started throwing bottles. That’s when riot vans showed up.

“They kept on charging at the police and the police kind of retreated.

“That’s when I decided to leave. It looked like the police had it under control, when I was walking away.”

Polly added that bystanders appeared to be watching the violence from a raised mound by the lake.

“It was like people were waiting for something to happen, and wanted to stand on the mound the spectate,” Polly said.

Local police have tweeted to reassure locals and confirm their presence at the park.

Anyone with information that could assist the police with their ongoing investigations into last night’s attacks should call 101.

I suppose they should all just stay at home