Fire-fighters wore breathing apparatus as they entered the burning building 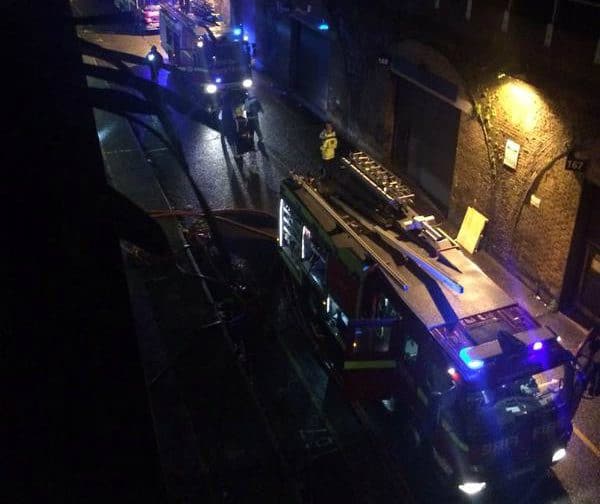 Three people were rescued from a fire on the third floor of a block of flats in Walworth in the early hours of this morning.

Fire fighters were called to the burning eight-storey block in Amelia Street at around 3.30 this morning and rescued three men on the third floor who had fled on to their balcony for safety.

The London Fire Brigade is now warning smokers to make sure their cigarettes are properly extinguished as the blaze seems to have been caused accidentally by one occupant smoking in bed.

The three men  were escorted to safety by fire-fighters wearing breathing apparatus and later taken to hospital by London Ambulance Service suffering from smoke inhalation.

Their flat suffered fire damage to a bedroom and a mattress.

London Fire Brigade’s Fire Investigator Matthew Cullen said:“Crews worked hard to stop the fire spreading to any of the surrounding properties. If you are a smoker it is vital that you take extra care. Fires caused by smoking materials – including cigarettes, roll-ups, cigars and pipe tobacco – result in more deaths than any other type of fire.

“It’s vital you ensure your cigarette is completely out when you’ve finished smoking it. If you don’t, you risk causing a fire which could destroy not just your home, but also your life.”

Four fire engines and 21 fire fighters from Lambeth, Dowgate and  Old Kent Road fire stations attended the incident. The fire was put out by 4.30am.

Here are our top fire prevention tips for smokers: