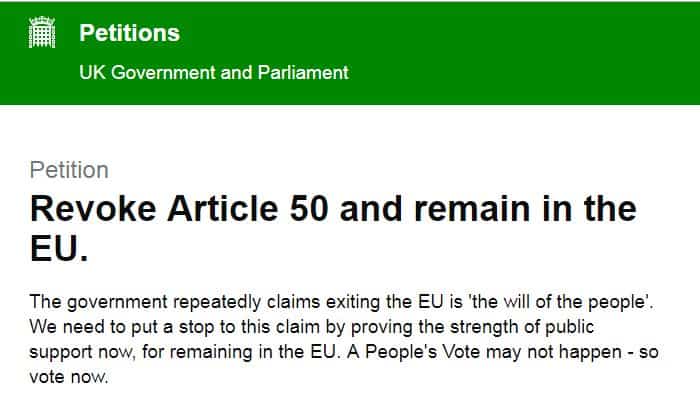 Close to six million people have signed the 'Revoke Article 50' petition, but the Government is having none of it

Southwark’s three constituencies are among those most heavily backing a petition to revoke Article 50 and remain in the EU, according to an analysis.

According to the anti-Brexit site, ‘Live From Brexit’, over 25,000 people had signed the petition from the Dulwich and West Norwood constituency.

The stat, over thirty per cent of the electorate, reportedly makes it the constituency with the twelfth greatest amount of signatures for the petition in the country.

The Bermondsey and Old Southwark constituency closely followed in thirteenth place, with 24,000 signatures, while over 21,000 residents in Camberwell and Peckham have also added their voices to the petition.

But in a formal response to the petition yesterday evening, the Government categorically ruled out revoking Article 50 saying it would “undermine both our democracy and the trust that millions of voters have placed in Government.”

While acknowledging the “considerable number” that have signed, it added: “17.4 million people then voted to leave the European Union, providing the biggest democratic mandate for any course of action ever directed at UK Government.”

The news comes following a ‘People’s Vote’ march in the capital on Saturday, which independent experts have estimated was attended by around 312,000 to 400,000 people. Some reports had suggested up to one million people had attended.

Among the attendees were councillors from across the political divide in Southwark.

Just over 72 per cent of Southwark voters favoured ‘Remain’ in the 2016 referendum.

Stop pandering to the anti democracy lefty liberals elitists. We had a more important and non biased vote. It was called the Referendum. If only you spent as much time reminding people the people of the real vote instead of a corrupt leftie student lead one you would have more credibility. What is happening to the Southwark News. I remember it being a A4 sheet of paper that the real long standing people of Bermondsey and Rotherhithe could relate to. Nowadays it seems to be a leftie driven rag that is obsessed with minority issues, green shit and poxy cyclists. There are other people in Southwark, sadly the Southwark News seems to have forgotten, or are completely ignoring them.