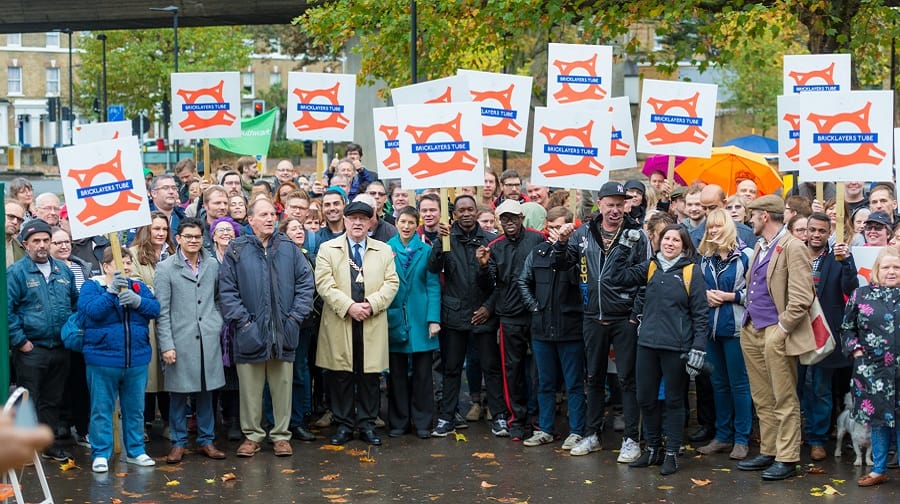 Campaigners want to persuade TfL to build a Tube station at the Bricklayers Arms as part of the Bakerloo Line extension (Credit: Andrew King Photography)

Campaigners fighting for a Tube station at the Bricklayers Arms say they are “making progress” after a successful rally.

More than 200 people turned out for a rally at the roundabout, at the southern end of Tower Bridge Road, on Saturday, November 4.

The event came after Bermondsey Street Area Partnership, Tower Bridge Road Alliance, and Bricklayers Arms Tenants’ and Residents’ Association joined forces with politicians, in a campaign to convince Transport for London to build a third tube station at Bricklayers Arms as part of the Bakerloo Line extension.

Earlier this year, TfL consulted on plans to build two tube stations on the Old Kent Road and a 25 metre-high ventilation shaft at Bricklayers Arms within plans for the £3billion extension.

But the proposals came under fire from residents and businesses in the area, who opposed the ventilation shaft and called for a tube station instead.

Suhel Ahmed, owner of Tower Tandoori on Tower Bridge Road, who helped organise Saturday’s rally, told the News: “My stance on it is we need a transport hub here and Tower Bridge Road, Old Kent Road, and New Kent Road would all benefit from it, as well as the businesses and residents.

“It would help to bring lots of tourists to this part of south London because it’s a bit of a no man’s land here and we want to put this part of the world on the map and to do this we need a tube station.

“Look at Bermondsey station and Southwark station today – they are both very successful stations and areas and if they didn’t have stations what would those areas be like? They would probably be forgotten like Tower Bridge Road.”

The 30-year-old said the campaigners planned to hold another rally in the near future, this time at City Hall, and are launching a dedicated website to raise more awareness.

Councillor Damian O’Brien, transport spokesperson for Southwark Liberal Democrats, who is involved in the campaign, added: “Many thanks to all who braved the weather last Saturday and attended our rally in support of a Bakerloo line extension station at the Bricklayers Arms.

“Many families brought their children down and we had representatives from a range of local groups and parties.

“It was a tremendous, well-spirited show of support for the campaign and I feel we are making progress to secure the tube station at the Bricklayers.”

Matthew Yates, TfL’s head of transport planning and projects, previously told the News that TfL considered Bricklayers Arms as a possible station prior to public consultation but decided it was “unsuitable as there was insufficient available land to allow for construction”.

This week a spokesperson said TfL had not changed its position.

A further public consultation is expected in 2018.