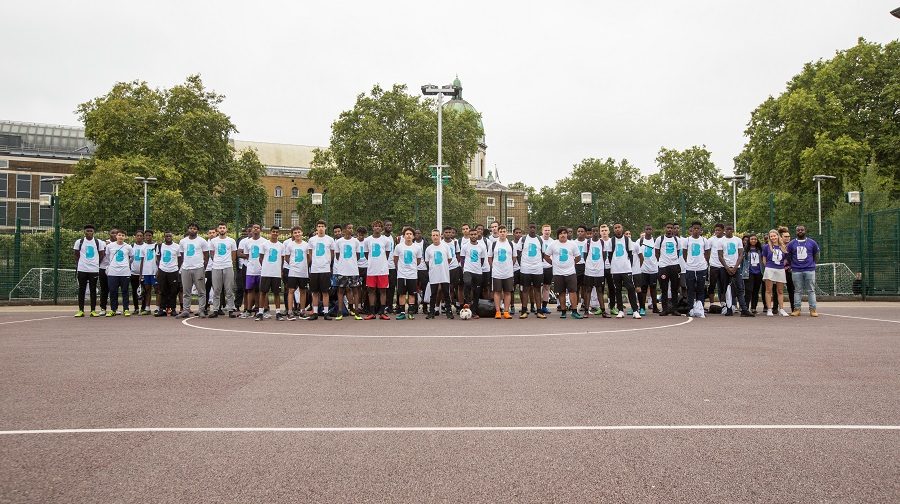 Two-hundred and fifty young people got together to thrash it out on the pitch in Elephant and Castle in a celebration of sport and community, writes Jessica Aszkenasy…

Youngsters from all over London went head to head in basketball and football tournaments in Geraldine Mary Harmsworth Park as part the B Active programme launched by Active Communities Network and Lucozade Ribena Suntory.

Volunteer Joey Liu, eighteen, grew up in a single-parent family on the Tabard Estate in Borough and has been volunteering with ACN since she was fourteen.

She recently won the Children of Courage Award for her school work and volunteering, and is on track to study History at the University of Exeter in September, followed by a law conversion course.

“My mum was telling me that back in her day she didn’t have this guidance so I should just make the most of it, so I did,” she said.

“I thought that if these people are offering support for young people involved in local crimes going on around us there’s no harm in using it to my best ability to get my friends out of trouble.

“A couple of my friends have been in trouble with knife crime and their past has been a bit difficult, but they’ve really picked themselves up.”

Full-time ACN employee Ibrahim Kanu, 25, from Camberwell started coming to ACN sessions when he was ten and started volunteering when he was fifteen.

“It’s really rewarding seeing smiles on people’s face and the differences it makes in the community.

“Kids don’t have much to do because of government cuts.

“When boys see me on the street they say hello and have a chit-chat, its really good,” Kanu told the News.

“There’s a lot of programmes targeting under-16s but when it comes to 16 plus, a lot of the kids don’t have much to do. It just gives them something to do and lets them know that there is other support,” he said. Volunteer Joseph Vambe, eighteen, from Elephant and Castle, has ambitions to go into politics.

“The afternoon has gone really well,” he said. “There’s not many events where all the community comes together, especially with all the crime that’s been taking place.

“I want to go into politics and be an MP.

“I have a drive to help change lives for the better and politics is where the power is.

“More events like this that brings the community together.

“People are here, they’re not elsewhere.”

Councillor Kath Whittham said: “It’s been a lovely afternoon. The ACN have been working here for a long time.

“Working with the sixteen to 24s is especially important, it’s an age group that often gets neglected.”

“It’s very encouraging for our community. It’s important to see them networking.”