If given the go ahead, building work could begin in spring 2019 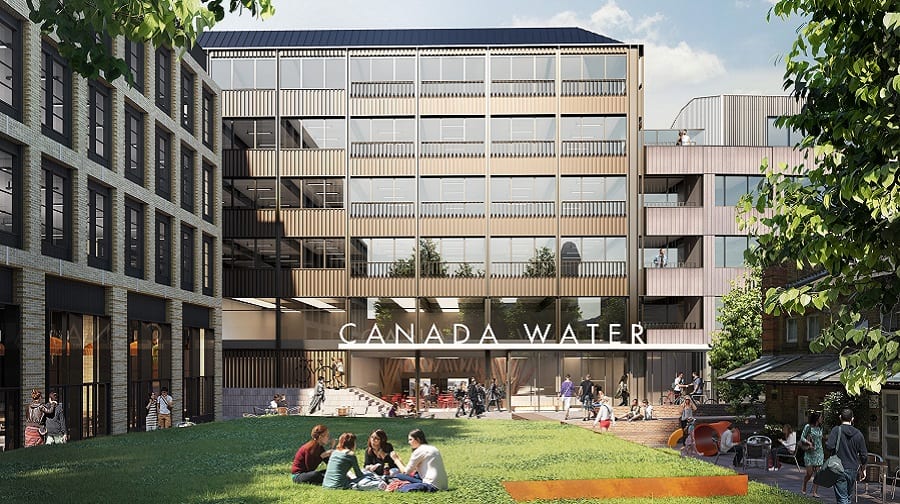 Plans for a huge 53-acre regeneration of Canada Water – which include a new high street, town centre and leisure centre – have been submitted to the council after four years of consultation.

British Land has submitted an outline planning application for its Canada Water Masterplan which would deliver up to 3,000 homes as well as workspace and retail, leisure, entertainment and community space if given the go ahead.

The outline submission also includes detailed plans for the project’s first three buildings which would be built on Surrey Quays shopping centre’s current overflow car parks between Deal Porters Way and Canada Water Dock, as well as the empty site at Roberts Close.

The first three plots would deliver 270 homes, 35 per cent of these would be affordable housing, split 70 per cent at social rents and 30 per cent at intermediate rent.

Also included in the first phase are plans for 285,000 sq ft of workspace, a leisure centre, shops and places to eat and drink. Details of an improved wetland habitat in Canada Water Dock, developed with the London Wildlife Trust, are also among the plans, including a crossing to allow the public to interact with nature.

The recently-vacated Rotherhithe police station, in Lower Road, forms part of the development, as well as the historic Dock Offices and former Harmsworth Quays Printworks in Surrey Quays Road.

The plans include flexibility for the fifteen-acre Printworks site, which once churned out editions of the Daily Mail, Evening Standard, and Metro and is currently being used as a live music venue.

The first option is to retain the press hall and bring it back into a range of uses, but demolish the lower-level buildings – the second is to redevelop the entire Printworks site and build a mixed-use commercial and residential development in its place.

If given the green light to go ahead by this autumn, building work could begin on the first detailed plots in spring 2019 with a target completion date of 2022.

This would mean the entire masterplan could be built by 2033. Roger Madelin, head of the Canada Water development project at British Land, said the submission of the plans marked “an important milestone”.

“Drawing on our experience of creating vibrant, mixed-use places across the capital, this major urban centre at Canada Water will provide an exciting place to live, work and visit, delivering high quality design, active spaces and significant economic and social benefits for the local community,” he said.

“We have worked closely with Southwark Council and the local residents of Canada Water to achieve this important first step, and will continue to work with them to enable a truly cultural and diverse neighbourhood for London.”

“British Land have done great work to consult and engage with local people and the resulting masterplan will deliver what local people want to see.

“In addition British Land, in conjunction with the council, has committed to a social regeneration charter which will ensure that the lives of existing local residents will be improved by the project which we believe to be a first for a project such as this.”