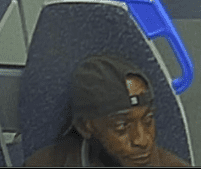 Image of a man police want to speak with

British Transport Police are appealing for any witnesses or people with information about a sexual assault on a train near Crofton Park to come forward. CCTV Image of the man police want to speak with

The police say the victim was attacked on a train travelling from Sevenoaks into London at 7.10pm on Sunday, September 20.

Officers say a man approached the victim and made “suggestive and threatening comments” before the assault.

The attack is said to have took place on board the train near Crofton Park – where he disembarked.

CCTV images have now been released of a man that police say could help their investigation.