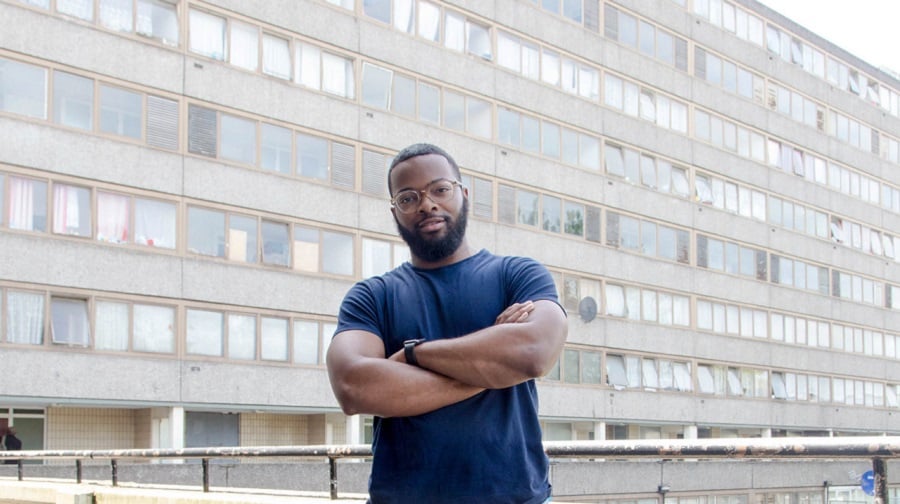 Shane Duncan, 25, in front of Aylesbury Estate, another example of social housing being demolished

Brixton filmmaker Shane Duncan is creating a documentary series on regeneration in south London, focusing on how new money flowing into the area affects the people who live and work there.

Shane, aged 25, began filming the series after seeing changes in his Brixton home, and his latest work, This is Peckham, was released last month.

“I kept reading about regeneration in my area and it didn’t match up with what I saw, what I felt… I wanted to find out for myself and hear from people that live and work here – not a pundit,” Shane told the News.

“I picked up my camera and started to ask people about their experience,” he continued. “As I started started to understand what was going around me, I knew I had to find out if this was the same throughout London, so I started the series.”

His series of mini-documentaries, the first of which is titled This is Brixton, capture what he believes are the endless catch-22s that come with regeneration, such as areas improving but prices skyrocketing and residents finding themselves pushed out.

“You can’t control the popularity of London; you can’t control where the money comes from,” says one man in the Brixton film, shortly followed by another saying,”I just hope that people from Brixton are involved in the change.”

There’s no contesting the fact that the Brixton – and other south London neighbourhoods– have been rapidly transforming in the past few years.

South London is becoming swankier, trendier, much more expensive – and, some would say, gentrified.

Gentrification – sometimes used interchangeably with regeneration – is a hot topic.

While ‘regeneration’ typically refers to knocking down old buildings in order to replace them, or undertaking projects to boost economic activity, the term gentrification is associated with more negative connotations.

Coined by British sociologist Ruth Glass in 1964, gentrification describes the displacement of the working class by the “invading” upper and middle classes, to the extent that “the whole social character of the district is changed.”

“It’s changing in a good way, but I also feel like the more it changes the more it might exclude communities that were here before,” said one woman in the Peckham documentary.

Besides Brixton and Peckham, Southwark has its fair share of regeneration projects that are sparking controversy, from Elephant and Castle’s divisive vote that took place on Tuesday to the gradual disassembly of Aylesbury Estate, the building that Shane is standing in front in the first photo.

He will soon begin production on the third instalment in the series: This is Croydon. The film, set to be completed by the end of the year, focuses on the planned addition of a Westfield shopping centre to the city.