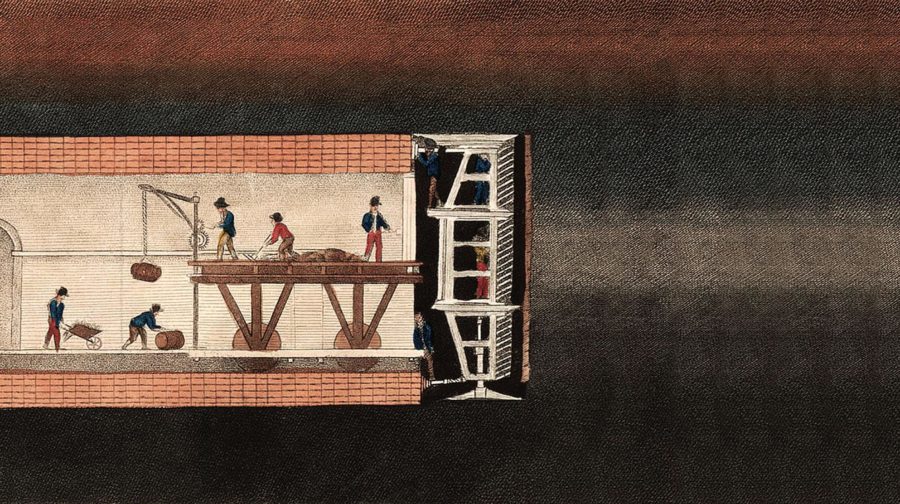 The Brunel Museum will mark St Patrick’s Day 2021 with a new commission celebrating the contribution of the Irish community to the creation of the Thames Tunnel, the first tunnel built under a navigable river anywhere in the world.

Working with the local Irish community, and Spectrum Drama, the piece will include music and performance based on the experiences of the men who built the tunnel. The piece will be filmed in the evocative Grade II* listed Tunnel Shaft, and released online on St Patrick’s Day on 17 March.

Many workers from Ireland moved to London during the 19th-century to find work. Some, like Seamus Fitzpatrick, moved to Rotherhithe and worked on the tunnel.

Workers who built the tunnel endured gruelling conditions. They worked up to 8-hour shifts, and when they were not working, sometimes they slept in the dark, damp, unfinished tunnel. Floods and explosions from gas lamps were a constant threat.

Working with Spectrum Drama, the Brunel Museum will compare the migrations of Irish workers to London in the 19th century to more recent migrations of the Rotherhithe Irish community. Spectrum will work to collect reminiscences of the stories of Irish culture and immigration to create the performance.

“This live performance will be a celebration of the Irish Community and their contribution to the development of this country, through their hardship, perseverance, joy, and musicality,” Clara Pereira, Learning and Volunteer Manager.

“We are delighted to be collaborating with the museum to tell the tales of the generations of Irish who many would argue built much of London” Suzanne Rayner, Spectrum Drama.

General Election 2019: "To lose to Neil Coyle is still losing to a Remainer" says Lib Dem candidate... after previously saying there was no such thing as a Labour Remainer