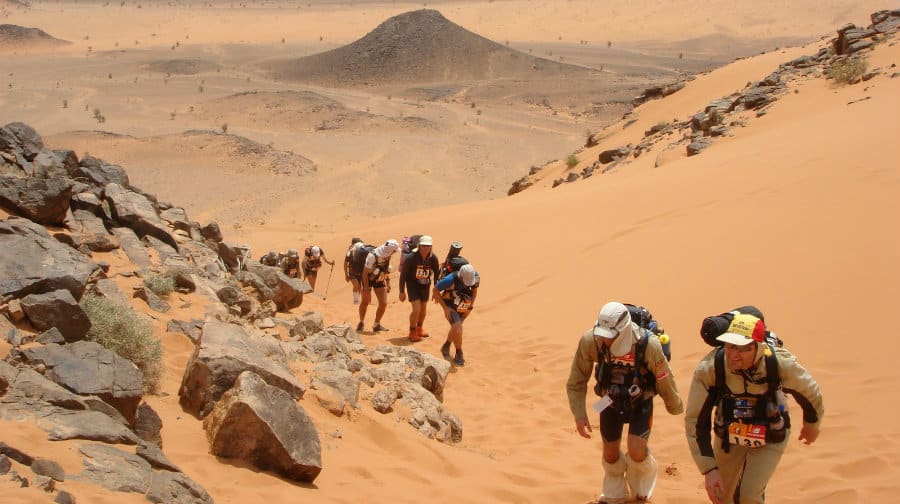 Southwark News boss Chris Mullany is midway through his gruelling 160 mile foot-race across the Sahara Desert, running through searing heat and sandstorms.

Chris, who is running to raise money for Waterloo-based Evelina Children’s Hospital, described the feat of endurance as ‘brutal’ as he reported back to the newsdesk from his desert camp.

Chris, who is one of the News’ managing directors, started the Marathon des Sables on Sunday, and has already run across some of the most challenging landscape in the world, carrying all of his provisions on his back.

Dubbed ‘the toughest footrace on Earth’, the Marathon des Sables sees competitors face temperatures of up to 50 degrees Celsius, or 120 degrees Fahrenheit, scaling fields of sand dunes, mountains as high as Ben Nevis, stony plateaus and dried up lakes, where only sand flows.

The seven day race is roughly the 26-mile marathon distance each day for three days, followed by ‘the long day’ – a 55 mile slog that can take competitors up to thirty five hours, running all day and throughout the night with a headtorch and then arriving at camp the following afternoon. There is then a final marathon day, followed by a ten mile ‘fun run’ at the end.

The News has now raised over £92,000 towards its £100,000 target to buy essential equipment for the Evelina Children’s Hospital, and Chris hopes his huge challenge will convince readers to donate once again.

You can sponsor Chris at: http://uk.virginmoneygiving.com/team/Evelina_2013 Or, you can pledge a donation by email to chris@www.newsatden.co.uk and not pay up unless he completes the race. You can also follow Chris’s progress (or lack of it), during the week, by clicking on http://live.marathondessables.com or www.marathondessables.com/en/