‘Build flats in Dulwich, not on our car park’, urge Walworth residents 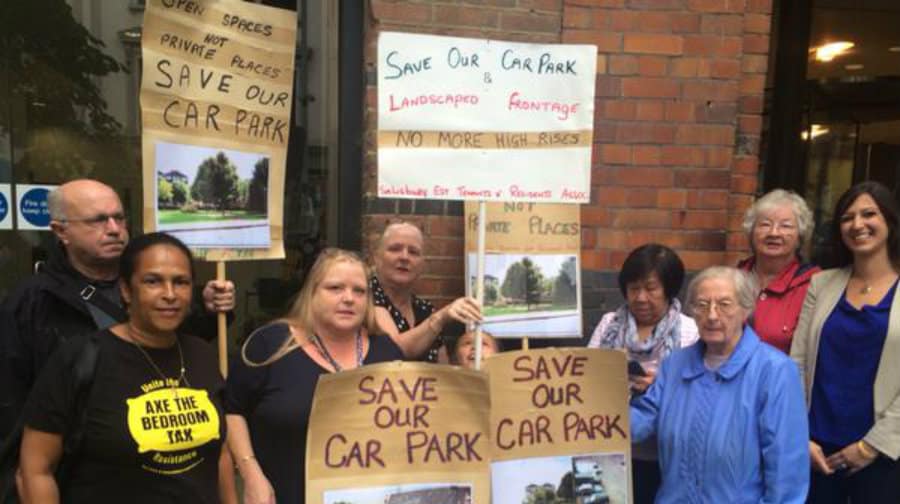 Angry residents told Southwark Council they should build new homes in spacious Dulwich instead of blocking in their car park with high rise housing at a protest last week.

Since the Heygate came down and taller blocks started popping up all around the Elephant, Salisbury Estate residents in Walworth say they already feel surrounded.

But now Southwark Council is proposing to build another block right on the estate’s car park as part of their ‘hidden homes’ programme – where some of the authority’s proposed 11,000 new council properties will be built on ‘unused’ pockets of existing estates.

“We don’t want to give up any of the car park because it’s so condensed around here already – it’s just putting more and more people into a smaller area,” said Salisbury Tenants’ and Residents’ Association chair, Maria O’Keeffe.

“I’m sure there’s plenty of space in Dulwich but because that’s the posh area they don’t take their spaces,” she added.

Maria and a band of bemused residents took placards down to Southwark Council HQ on Wednesday saying ‘save our car park’ and ‘no more high rises’ before they gave a deputation at a council meeting.

“Years ago they tried to build on the car park and we put them off then,” said Maria. “At least we made a demonstration. You’ve got to go down fighting because they’ll just walk all over you otherwise.”

Cllr Mark Williams, Southwark’s cabinet member for regeneration and new homes, said: “In Southwark we are tackling the housing crisis head on and have an ambitious programme to build 11,000 new council homes.

“I understand the concerns of the Salisbury Estate residents about the loss of car parking, and we will work with them at every step of the design process to try and find a solution. I will visit the estate with the residents to see what steps we can take.”

Southwark NewsNews‘Build flats in Dulwich, not on our car park’, urge Walworth residents