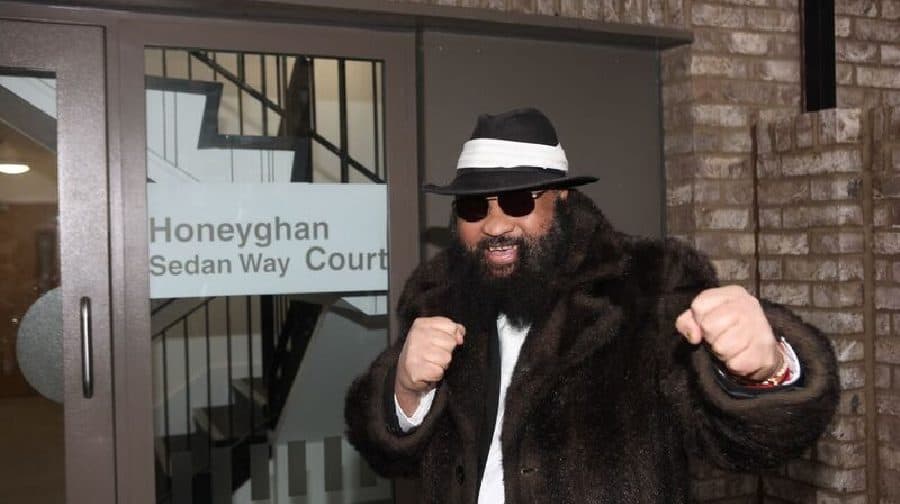 Boxing champion Lloyd Honeyghan is one of seven Walworth legends to be commemorated in the new 147-home Harvard Gardens development.

The boxer, who worked on East Street market as a teen to save up for boxing equipment, was joined by his family on Friday at the opening ceremony, where he cut the ribbon on the “Honeyghan” block.

Lloyd is one of seven SE17 legends to get blocks and streets named after them on the development, which is the latest phase in the Aylesbury Estate redevelopment.

The list of honourees was drawn up by Walworth locals, after they participated in the 2011 Put it on the Map local history project.

The project aimed to get local residents involved in renaming buildings and streets in their area, with the Aylesbury redevelopment meaning old street patterns would be lost.

Lloyd, who says his motto is “born in Jamaica. Built in Bermondsey”, took up boxing at Fisher Amateur Boxing Club aged eleven.

He had an almost unbeaten record during his career, with just five losses compared to 43 wins.

“When they told me about it [the block], I couldn’t believe someone would build a building and put my name on it. I still can’t believe it!” said the 56-year-old.

“I grew up in this area and I have really good memories coming back here,” he said. “I believe Southwark is the best borough in London.”

Lloyd’s sister Jessie Honeyghan said that she was “humbled” by Friday’s ceremony.

“I’m humbled that people consider my brother to be part of such a wonderful regeneration project. It’s remarkable!”

Prince Monolulu, the exuberant racing tipster who was often seen at East Street Market selling his horse tips to local people, also has a building named after him.

His grandson, Peter Granwe, made the 1,200 mile trip from his native Sweden to be at Friday’s ceremony.

Put it on the Map has been delivered by the Creation Trust, a charity which aims to support residents on the Aylesbury Estate.

Charlotte Benstead, Chief Executive of Creation Trust, welcomes the latest part of the naming project which has already honoured a number of famous Walworth families.

“This latest part of the naming project brings us bang up to date with a selection of names that really reflect the diversity and vibrancy of south London.

“We hope that they are not only tributes but go on to inspire people to be the best they can be wherever they live.”

Part of the Windrush generation, Anthony was a bus driver so popular withpassengers he was awarded the People’s Choice MBE. He went to Buckingham Palace on his bus to collect his award.

Bermondsey man who served as a policeman in Walworth for thirty years. He wrote eleven books and in 1978 was awarded an MBE.

Scoutmaster who tried to save his Walworth troop of 23 boy scouts after their ship capsized at sea while en-route to a holiday. Eight of them perished.

Rector of St Peter’s Church in Walworth, the crypt of which was used as a shelter for people in the area. He received a British Empire Medal at the end of the war.

A Welshman who dedicated 34 years of his life to community development projects in Southwark. Headhunted by the police, he worked on gang murders, counter-terrorism and supporting newly arrived communities.