Donna says she refuses to leave her home until she knows the flat is secure, as the crooks are sure return 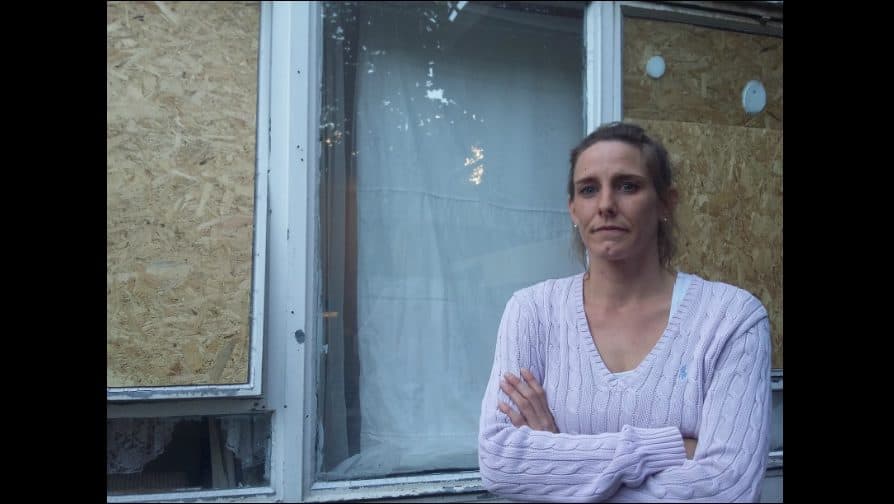 An Aylesbury Estate mum of three has told the News she feels too frightened to leave her flat after being burgled last week.

Donna Saxby, 36, said she is certain her Wolverton flat was being watched, after thieves broke in while she was away enjoying the sunny weather with her kids last Thursday.

Donna, who was granted the flat by Southwark Council as temporary accommodation, said: “We’re all terrified now. I left at 12pm and we came back at 4pm to find they had nearly cleared the place.”

Among the valuable items missing from the flat were two PlayStation 4s, two Ipads, three watches, a pair of Beats headphones, two of her children’s rucksacks, and her son’s Xbox.

She says she is terrified for her children.

“They even went through my daughter’s knicker drawer. It’s disgusting, my daughter was shocked,” Donna said.

“But it shows they came and did it less than an hour and a half after we left. That’s why I’m convinced they were watching.

“We also think there was more than one of them, and they broke out of the bedroom door on the ground floor. I reckon someone would have seen them, it’s really exposed all at the front of Wolverton.”

Officers believe the crooks broke in after jumping over her back garden and breaking in through her living room window. It appears they originally tried to enter through her adjacent kitchen window, only to find it protected by reinforced glass.

Donna now says she feels too scared to leave the house for fear they will try again.

“My friend is now taking my kids to school in Bermondsey. I don’t want to leave, I’m terrified they will just try and break in again,” she said.

“The police who came over say this happens constantly around here. The officer came over was visiting another flat just after me.”

Police have said they signed into one of the PlayStations, which could lead them to locate the suspects, but Donna says she waited more than six hours before police arrived. “They said give it a week and they will try and trace the IP addresses on our laptops, but they will be long gone by then. Honestly I bet we will find most of it down the market if we ever see it again.”

Cllr Stephanie Cryan, cabinet member for housing, said: “The break-in must have been very distressing for Ms Saxby and we have been as quick as possible in first securing the broken windows temporarily at 10pm on day she was burgled – this is treated as an emergency repair, then getting the glazing ordered. As the glazing needs to be measured and ordered, this can take a few days. ”

Police confirmed the details of the incident, and are appealing for anyone with helpful information to call 101.