Burly is spoiled rotten, with his owners spending £15,000 on him in just six months - and now he's Primark's star 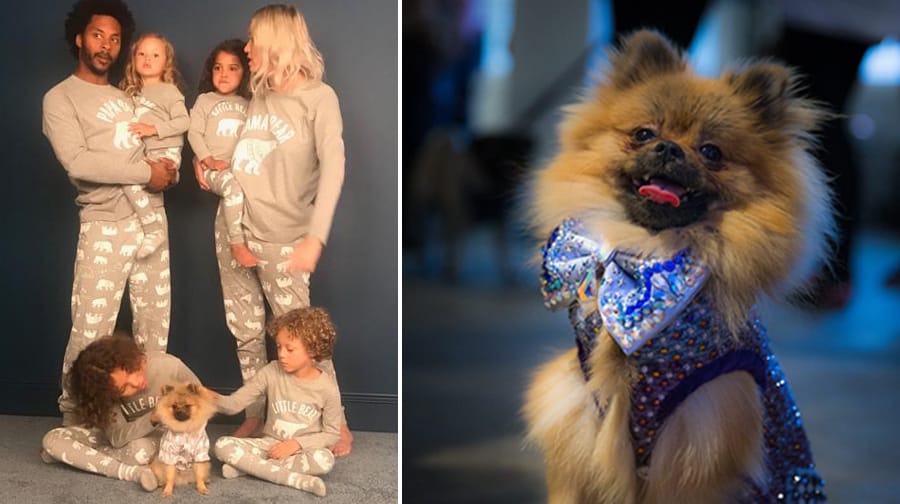 A pampered Borough pooch who hangs out with top celebs might yet become an A-Lister himself after landing a plush gig on Primark’s Christmas advertising.

Burly Bear has amassed a dedicated social media for his escapades, often featuring in snaps with top names like Keeley Hawes and Daniel Radcliffe.

The cuddly Pomeranian, who counts a £5,000 personalised Swarovski-crystal jacket among his many designer outfits, is now featuring on the Christmas in-store ads at Primark after being talent-spotted by producers.

“Someone had shown Burly to them [Primark] and they asked they could book him,” said Michael O’Hagan, who owns the pooch along with his partner, Ken, a freelance fashion hairdresser.

“We were really excited, I’ve been waiting months and months for the ads to come out.” No expense is spared for pampered pup Burly – including a 5k personalised jacket (Image: @burlybearpom)

The publicity blitz, which sees Burly modelling leads and PJs alongside a family-of-five, launched this week.

The prime advertising spot is just the latest in the Pomeranian’s adventures.

Since been featured in the News in August, Burly has netted himself a Wikipedia page, strutted along the red carpet at the BFI and been featured in a new online magazine called Paawhouse, where he will be ‘writing’ a life-style column.

He will no doubt have lots of tips to give his fellow dogs and their owners, as spoiled Burly eats an expensive raw food diet, wears designer collars from Tiffany’s and Louis Vuitton and rocks a pricey Moncler jacket. After meeting Keeley Hawes, Burly featured with the famous actress in a photoshoot (@burlybearpom)

Yet more collars and leads are some of the latest acquisitions – alongside a pair of glasses.

“We’ve got him a lovely leather jacket, collars and leads, he’s got about twenty now,” said Michael, who works in construction.

“We should really stop!” he laughed. The couple estimate they have spent around £15,000 on Burly in about six months.

The nine-month-old often spends his spare time hanging out with celebs, as he enjoys exclusive access to stars through Ken’s work as a hairdresser.

Among his A-List pals are Alan Carr, Lily Collins and Game of Thrones actress Emilia Clarke – who even gifted him a doggie rain mac. But the pooch’s packed agenda is not finished with the Primark ads. “We’ve also registered him to become a therapy dog,” said owner Michael.

He has registered with two services which provides time with dogs for those needing emotional support, such as those who are sick in hospital.

Southwark NewsNewsBurly Bear: Spoiled Borough pooch whose owners have spent £15,000 on him in six months featuring in Primark Christmas ads