The deluge led to school closures, flooding and traffic chaos. 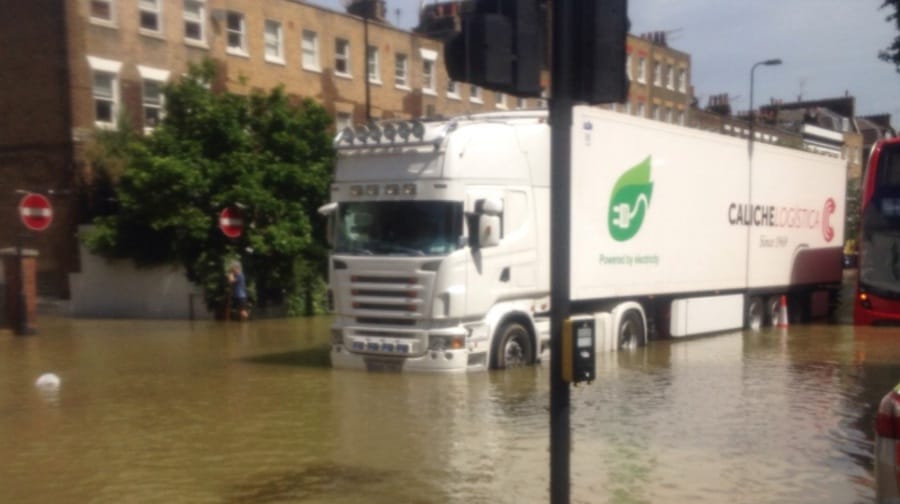 Kennington Park Road was closed on Monday and Tuesday morning after the water main broke, submerging the street in up to half a metre of water.

Some vehicles, including a large truck and a bus, were abandoned by their drivers in the deluge, while traffic in surrounding areas ground to a halt as the road was closed.

Two libraries and nine schools were closed on Monday, and around fifteen properties along Kennington Park Road were flooded.

The burst main also led to many SE1, SE5, SE11, SE17 and SE24 residents experiencing no water in their homes and businesses. Water returned to some properties, but at press time the problem was still continuing for others.

When the flood was at its height, ten fire engines and 72 firefighters attended the incident.

Cllr Darren Merrill, Southwark cabinet member for environment and public realm, said: “Thames Water is the lead authority and is working to fix the pipe. We have been informed that they have now isolated the problem and residents should begin to see water supply return gradually.

“We are not currently aware of any homes in Southwark that have been flooded due to [the] incident, and our main priority is still identifying and assisting any vulnerable residents who may still be experiencing difficulties while full repairs are carried out and water is restored.

“We know what an inconvenience this is for many people, especially in this hot weather, and Thames Water has assured us they are doing all they can to fix the pipe.”

A spokesperson for Thames Water said: “The majority of our customers had their water supply back on Monday evening, however there may be some properties, particularly flats and high-rise buildings, struggling with water pressure today (Tuesday).

“We’re very sorry about this and our engineers are working hard to re-route water across our network of pipes and bring water pressure back up to normal levels.

“One lane has reopened on Kennington Park Road and our teams continue to work around the clock to repair the pipe and return the road to normal.”