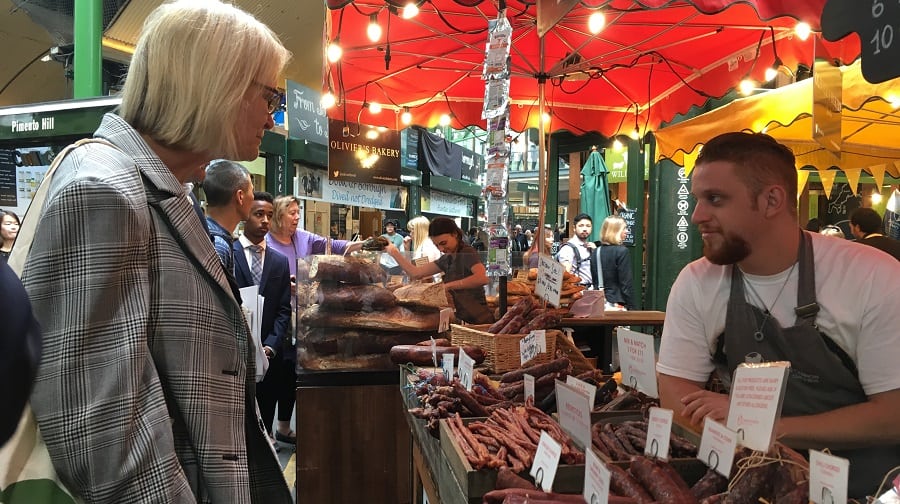 The business minister has vowed to “call in” any insurance providers yet to pay out to traders who suffered losses after the Borough Market terror attack.

Margot James MP did not make a “direct offer” to help businesses and traders affected by the attack when she met with them at the market today, Thursday.

However she did commit to “calling in” insurance providers who have yet to pay out on some of the business interruption clauses and terror insurance.

The Conservative Stourbridge MP met with the market’s senior team before hearing first-hand accounts about how businesses were affected by the market being closed for eleven days during the police investigation.

She was joined by Bermondsey & Old Southwark MP Neil Coyle, who called on the Government to step in and help.

“There are jobs on the line here,” he told the News. “If we don’t want the terrorists to win, we need the Government and others to step in and do more now.

“There hasn’t been a direct offer today, which is a shame. Lots of people are stepping in, but sadly the Government is yet to do so.

“It [the meeting] was a good chance for the individual businesses and traders to raise their concerns with the minister and demonstrate this isn’t just a market, this is a provider to restaurants across London, so the loss to local businesses is about £1.4million – people don’t realise that.”

Mr Coyle added that the 21-day process of officially declaring a terror attack as “terrorism” was too drawn out and needed to be brought up-to-date.

Despite the incident on June 3 being labelled a “brutal terrorist attack” by Prime Minister Theresa May within hours, traders and businesses in the area were left in limbo for weeks because insurance providers were unable to pay out until the Chancellor officially classified it as terrorism.

“That process of certification is too slow,” said Mr Coyle. “The minister has committed to look at renewing how terror attacks are set out in Government terms and to put more pressure on the insurance sector to bring its policies and procedures up to date.

“So hopefully, not only will the traders here get support soon, but in the event of any other attack anywhere in the country people can expect quicker support and more support which would be a silver lining of what was a horrific incident.”

Their being heard shouting “this is for Allah” wasn’t determinative then?