The club's board, owners and fans have all criticised Ben Maitland's leaflets. 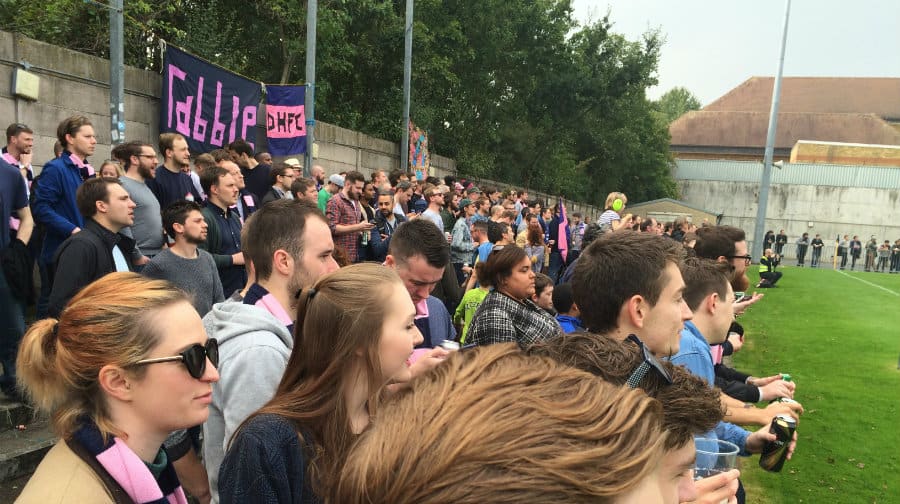 A candidate for next week’s council by-election has been accused of “scoring an own goal” after campaigning against the proposed redevelopment of Dulwich Hamlet Football Club’s stadium.

The leaflet stated: “Like many supporters of Dulwich Hamlet FC, Ben is concerned about plans to build on its pitch and move it to a smaller alternative nearby.”

It also outlined worries about building luxury, rather than affordable, flats on the old site and the loss of green space involved in moving the pitch to a new location.

A copy of the controversial leaflet.

However, in an official response, the club accused Mr Maitland of “scaremongering and inaccuracy.”

The statement, titled “Don’t Believe All You Read…”, said: “We believe that the vast majority of our fans who care for the future of our club will support the development, and this will be shown once the Dulwich Hamlet Supporters Trust poll its members on supporting the proposals.

“The new stadium will actually see an increased capacity and will be a development that will result in a much larger community use all round the clock for our area, not just for Dulwich Hamlet.

“The flyer also expresses concerns about the loss of green space, but the new stadium will be built around the current footprint of the ageing all-weather floodlit surface currently behind our home.”

Fans on social media said the decision to hand out leaflets arguing against the move was “idiotic”, “mind-blowingly short-sighted” and an “abuse of football and fans as [a] vehicle for political gain.”

One person commented on Twitter: “Ben Maitland scored an own-goal (excuse the pun) with poorly researched and embarrassing leaflets. Wasted exercise and Saturday.”

Mr Maitland told the News that he felt the leaflet had been misinterpreted.

He said: “I am determined to help secure Dulwich Hamlet’s long term future at Champion Hill. The club is a vital part of our community and does a huge amount of work with young people in this area.

“We clearly need to increase the amount of social housing across Southwark, but building luxury flats over our football ground will not help provide the affordable homes we need.”

A spokesperson for Hadley Property Group, who stepped in to buy the club and save it from administration last year, said: “Hadley Property Group’s proposals will guarantee the long-term future of Dulwich Hamlet FC, and enhance and maintain Green Dale.

“The scheme will establish much needed community sport and leisure facilities within the heart of East Dulwich, including partnerships with schools, football academies and disadvantaged social groups. Hadley Property Group has been engaging closely with the local community throughout this process and would be happy to meet with the candidates to fully brief them on the proposals.”

UPDATE: Since going to press, the Dulwich Hamlet Supporters Trust have also released a statement outlining their dissapointment at Maitland’s attempt to “represent the views of large sections of our supporters.”

It said: “To be clear, DHST has not yet had any formal contact with any of the prospective Councillors, but we would be happy to meet with any of them should they wish to discuss the future of the club.

“We welcome political parties who have a genuine interest in our club, are willing to be transparent about their views, can keep an open mind as the details of the development are finalised, and demonstrate a real wish to work further with the club and it’s legions of enthusiastic supporters in their community and beyond.”

It added that the trust plans to poll its members to determine whether or not the group supporters the proposals put forward by the Hadley Propert Group.

UPDATE 2: Ben Maitland has informed the News that he has made contact with the supporters trust to discuss the situation in more detail.

I think Bens concerns seem legitimate, developers have a history of taking the council for a ride and there is nothing wrong with wanting to know all the details!