Sarah hadn’t been feeling herself since the death of her father so would take comfort in the small things in life, such as birdsong, as she walked around the city looking for her dead dad’s motorbike. 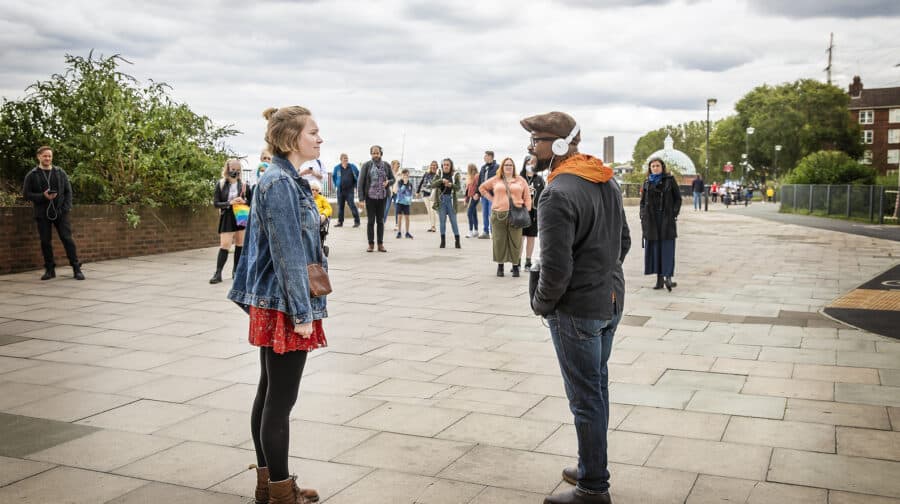 When, after six months of lockdown, you really are in need of a hug, the last thing you need is to have a bad day, which is what Sarah thought she was having when a stranger began making unwanted small talk with her in the street, writes Michael Holland.

Sarah (Laura White) hadn’t been feeling herself since the death of her father so would take comfort in the small things in life, such as birdsong, as she walked around the city looking for her dead dad’s motorbike. So when she is approached by a man she doesn’t know she wants him to keep his distance. It is only when she realises he knows a lot about her, as if he can read her mind, that a rapport between the two develops.

C-o-n-t-a-c-t is a socially distanced outdoor play that incorporates 3D sound via headphones and apps, combined with a live performance acted out in the streets around London. An audience of no more than 15 follow and eavesdrop on Sarah and Raphael (Max Gold) as their verbal and mental battles echo around the watchers’ heads, if not actually around the city’s streets.

This is a different type of theatre for the contemporary world, and once you get your head around the concept and stop looking at the bemused faces of the passersby wondering why random people are all facing the same way for apparently no reason; or all moving off in the same direction at the same time, then you can concentrate on the story and the action unraveling before you.

I liked it a lot, as did my fellow audience members. It is a step up from the usual promenade theatre and has a lot of potential. For instance, you can choose any number of languages to listen to as it will always match the action.

Plus, in these days of many theatregoers still wary of sitting in auditoriums, this is the ideal antidote to no live theatre at all.

Clapham Common: At the entrance of the park opposite 22 The Pavement, SW4 0HY

Cutty Sark: at the entrance of the Greenwich Foot Tunnel South, SE10 9HT