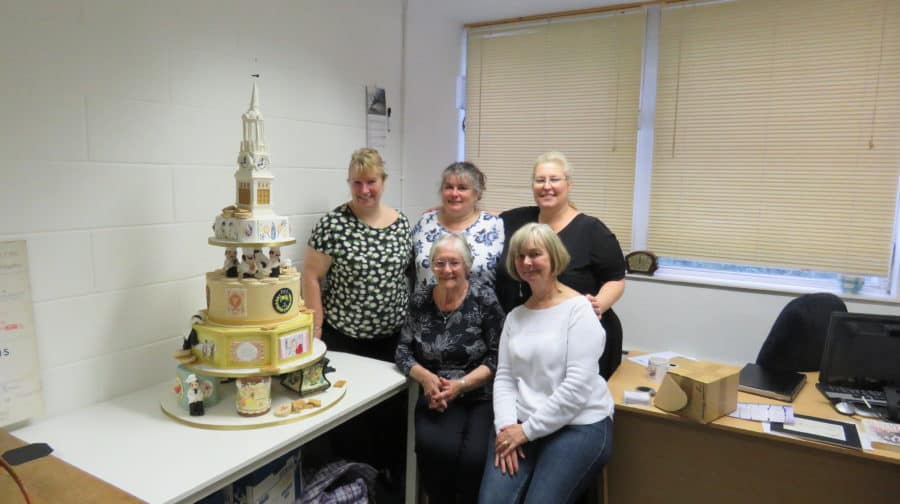 The cake, pictured alongside members of the British Guild of Sugarcraft who created it

Talented sugar-craft workers have unveiled a showpiece cake dedicated entirely to the history of Bermondsey’s Peek Frean’s Biscuit Factory – two years after they painstakingly recreated a replica of the Queen’s wedding cake.

Workers at the factory, off Drummond Road, made a six-foot tall cake for the-then Princess Elizabeth’s marriage in 1947.

A full-scale replica of the towering cake was made out of icing sugar by proud factory officials – but it was destroyed by vandals who broke into Rotherhithe’s Pumphouse Museum where it was being stored.

But thanks to the tireless work of the British Guild of Sugarcraft, and volunteers at the Peek Frean museum, another replica was made from scratch and officially unveiled in 2017.

Now, two years on, skilled British Guild of Sugarcraft members have returned to the museum to unveil an intricate show-stopper of a cake – with each tier representing a different slice of local Peek Frean history.

Carolyn Harvey, who is chair of the guild’s Region 8, which covers London and the South-East, explained: “We did the base tier for the last cake, and everyone just enjoyed the camaraderie and learning new things while doing the Queen’s cake.

“So therefore it was kind of like, what’s the next thing?

“We’re probably looking at about 55 or 60 people who helped make the cake.” Tiers of the cake were assembled by member groups of the region, with painstaking attention to details representing the Peek Frean history – even including the now demolished clock tower which stood close to the railway line.

For example, one tier of the cake represents only things that can be found in the Peek Frean museum, explained one British Guild of Sugarcraft member, Justine, who oversaw the tier.

“The third tier represents things all from the museum,” she told the News, “so everything on there can be found in the museum.”

Another tier, the base tier, takes its inspiration from all of the Biscuit Factory’s distinctive biscuit tins – with designs ranging as far back as 1875, explained another guild member, Jackie.

A further tier is dedicated solely to the numerous sporting clubs and events associated with the factory, including hockey, marathons and swimming.

The show-cake was first unveiled at an exhibition in Brighton earlier this month, to overwhelmingly positive reception.

“The reception has been amazing,” said Carolyn. “Lots of people stopped by our stand asking how on Earth it was done.”

The show-stopping cake is currently on display at the museum where it will take pride of place alongside the replica of the Queen’s wedding cake.

However, it will also be shown to other Sugarcraft guild members and enthusiasts as it is to be taken to the national exhibition at Birmingham’s NEC later this year