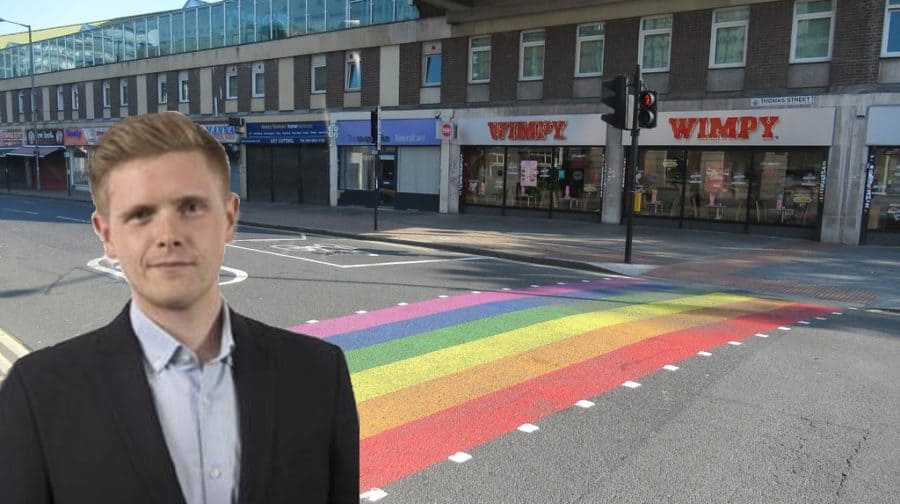 A Southwark councillor has called for the council to install a permanent pride crossing to honour the borough’s diverse LGBTQ community.

Cllr Victor Chamberlain, who represents Borough and Bankside ward, has called on the council to be the first in London to use a new ‘progress’ design for the pride crossing.

Designed in 2018, the design uses traditional Pride colours but also includes five black, brown, light blue, pink, and white chevrons to also symbolise people of colour, trans individuals, and those living with HIV/AIDS and those who have been lost.

“Southwark is home to some of the UK’s largest and most diverse LGBTQ+ communities,” said Cllr Chamberlain.

“Yet a recent LGBTQ+ study showed 58 % of respondents believe that there is no sense of LGBTQ+ community in Southwark and over half don’t feel safe in our borough or that mainstream services were inclusive of LGBTQ+ clients.

“It’s now time the Council did something about this and very visibly showed solidarity with our diverse LGBTQ+ communities.

“These visible signs of equality are not tokenism. It is vital that we have visible, prominent and physical signs that our diverse LGBTQ+ citizens are integral to our community.”

The new flag has been adopted by other institutions in London, including the Mayor’s office. Lambeth Council unveiled a traditional permanent pride crossing outside Brockwell Park last year.

In response to Cllr Chamberlain’s request, a council officer has told him: “We recognise that measures like rainbow crossings can make a big difference and so we’ve a workstream underway to investigate the various practicalities involved in installation.”

Good. Small acts like this – whilst they might be entirely understood by all – can make a huge difference to some people at the time they need it. Up with this kind of thing; kindness and interesting things in our streets.