Calls for Mayor to intervene over homes plan near Crossbones Graveyard 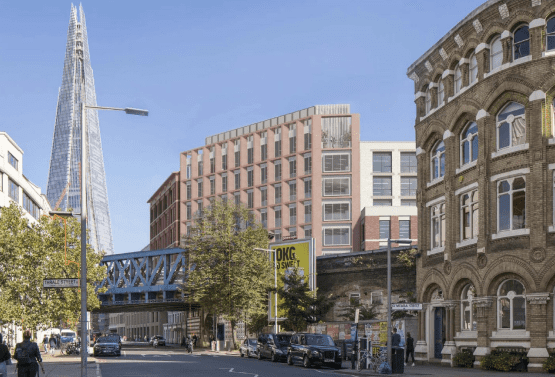 A Bankside residents’ group has called on the Mayor to intervene after offices, homes and shops were given planning permission on TfL-owned land in Bankside.

The scheme on the plot, referred to as Landmark Court, will see six buildings constructed with various heights on land adjoining Crossbones Graveyard and Memorial Garden.

Thirty six homes will now be built on the site, despite indications from Mayor Sadiq Khan that it could see up to 120 homes.

Included in the changes are “enhancements to Crossbones Burial Ground” and changes to the public access path to the burial site.

It has been left undeveloped since being acquired by TfL in the early nineties for use in the Jubilee Line extension in 1997.

Chair of Living Bankside, Amir Eden, has criticised the approved scheme for not providing “100  per cent affordable homes” to keyworkers.

In an open letter to Sadiq Khan, the group said: “In 2017 Living Bankside supported your justified call for a proper pay rise for key workers / emergency workers.

“We indicated that by building genuinely affordable homes at Landmark Court in close proximity to two of the world’s renowned teaching hospitals, various schools, police stations and fire stations that together we can lead by example on supporting key workers and on how to address London’s housing crisis.

“Many of our Key Workers, such as our nurses, doctors, teachers, police and firefighters continue to find it increasingly difficult to live in London.”

The letter adds: “This scheme is surely one that should be called in.” The ‘call-in’ would need to take place before June 29.

However, councillors had heard at a meeting earlier this month which approved the scheme that it could provide up to 1,700 jobs, and enable more people to enjoy Crossbones Yard.

A TfL representative told councillors that it was a “unique opportunity to transform a missing piece of Southwark Street.”

Meanwhile, the developer U+I, told the hearing that the burial site would be “protected and enhanced” as a result of the plans.

120 homes for the rich which will yet again push up prices in the area . They talk about these homes as if they are for the people of London or key workers . Affordable housing in London is defined as those earning £40,000 – £70,000 a year . Southwark is determined to destroy this borough , social cleanse and rip down all social housing and replace with eyesore building like this for foreign buyers to launder money and get the automatic right to live in the UK .

There is also the environmental impact of hundreds of diesel guzzling trucks arriving in the area over a long period and the traffic chaos this will cause as they close off streets and pavements …so much for clean air Southwark. Why is everyone remaining silent ?

You have heard the saying “You get what You pay for” Well. you also get “What You Vote For”