The wall is directly opposite the Bermondsey school on Rolls Road, with hundreds of children passing it every day. 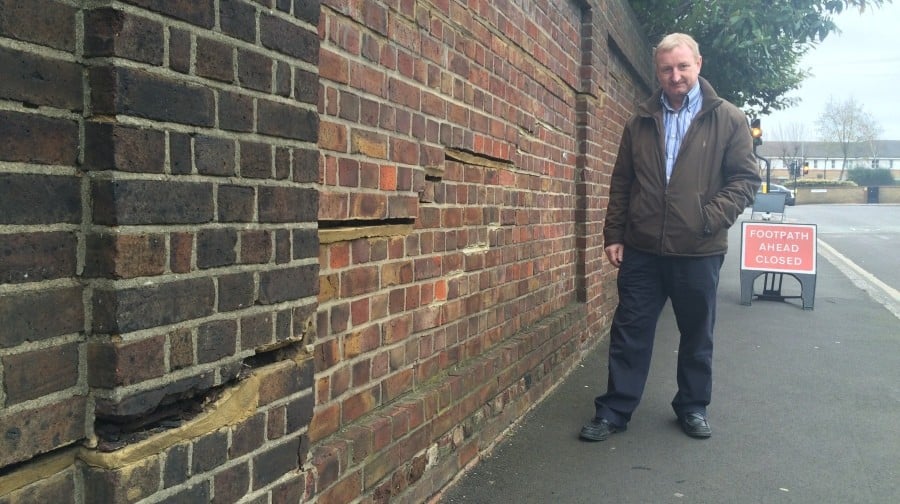 Worried residents are calling for a dangerous wall near a Bermondsey primary school to be replaced before tragedy strikes.

The unstable wall, which has several large cracks and leans heavily at one point, is directly opposite Phoenix Primary School in Rolls Road. Every day, hundreds of pupils walk past the wall on their way to and from the school, and nearby resident Andy O’Neil is worried that it is only a matter of time until it collapses.

He said: “All it would take is a big gust of wind or some vibrations in the road and the wall would come down. It’s been repaired a lot of times but it’s time to completely replace it before it’s too late.

“My grandchild goes to the school. There are so many young ones around here, walking past the wall every day. Someone could be badly hurt or even killed.”

His wife Pam shared his concerns.

She said: “Every day I see people walking by it and I think ‘Oh my God!’ If one person is in the wrong place at the wrong time, something horrible could happen.”

She was also frustrated with the lack of action by Southwark Council, who she contacted three months ago about the wall.

She said: “I rang up and remember waiting for ages. I spoke to someone, then was put through to someone else, who then put me through to no one and the phone went dead.”

Councillor Mark Williams, cabinet member for regeneration, planning and transport, said: “We are grateful that local residents have raised this issue with us. An inspection has been carried out last May and again this week, officers did not find the wall to be immediately dangerous. However, we will be contacting the property owners immediately to resolve the issue.”

A huge crack near the base of the wall.