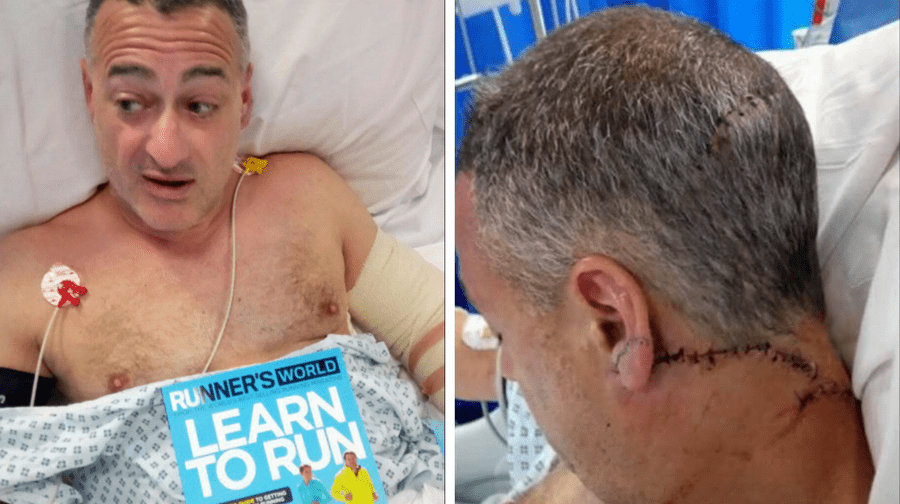 Thousands are calling for a Millwall fan to be awarded the George Cross after he was stabbed several times while trying to protect others during the London Bridge terror attack.

Roy Larner had surgery for his injuries at St Thomas’ Hospital after standing up to the three attackers on Saturday.

The Lions fan shouted “f*** you, I’m Millwall” as he took on the attackers, throwing stools and glasses at them and using his bare fists. He was stabbed in the head, neck, back and front, and had his fingers cut as he stood up to them.

He was later pictured holding a Learn to Run magazine as he recovered in hospital.

He told The Sun: “They had these long knives and started shouting about Allah. Then it was, ‘Islam, Islam, Islam’.

“I took a few steps towards them and said, ‘F*** you, I’m Millwall’. So they started attacking me.”

He added:?“I stood in front of them trying to fight them off. Everyone else ran to the back.

“I was on my own against all three of them, that’s why I got hurt so much.

“It was just me, trying to grab them with my bare hands and hold on. I was swinging.

“I got stabbed and sliced eight times. They got me in my head, chest and both hands. There was blood everywhere.”

Three other Millwall fans were also caught up in the incident on Saturday.

Friends have already managed to raise more than £17,000 for Roy after setting up a Just Giving page with the intention initially of raising £500.

Thousands have also signed a petition calling for Roy to be awarded the George Cross for his act of bravery.

Kent taxi driver and Millwall supporter Darren Kenny was hailed a hero after ferrying people away from the area and refusing to accept payment.

Gerard Vowls also tried to barricade a restaurant and threw pint glasses, bottles and a table at the attackers while telling others to run for safety.

Millwall football club released a statement this week, praising Roy: “Millwall Football Club wishes to commend Roy Larner for his immense bravery in incredibly terrifying circumstances and indeed all other members of the public whose actions helped to save others.

“That praise is extended to our remarkable emergency services, who proved yet again what an asset they are in protecting the public against these heinous acts.

“Millwall stands together with all other football clubs and organisations in offering its absolute support to those in need following the tragic events of last Saturday night.”

OUT OF ALL THE HORROR, OUR ENDURING SPIRIT SHINES THROUGH
Southwark News Editorial