Calls to protect fences throughout south London, once used as stretchers in WW2 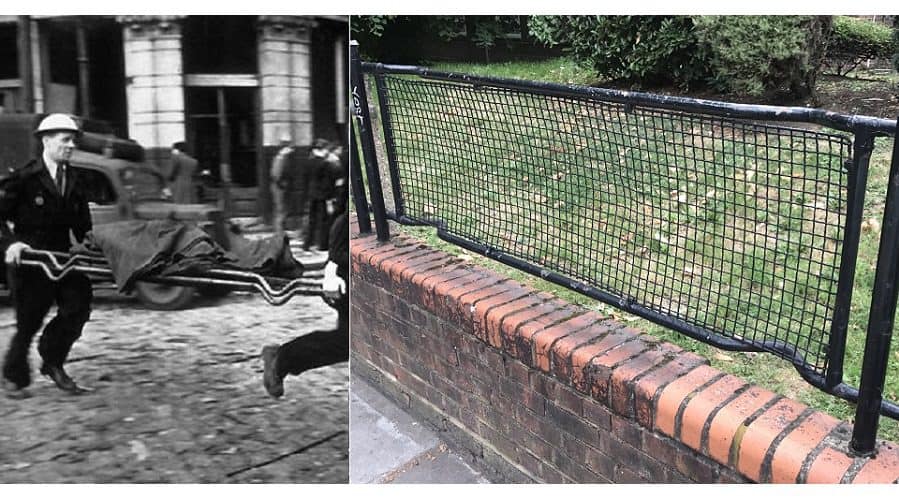 Local historians are calling for councils to protect metal fences made from WW2 stretchers once used to help thousands of wounded civilians.

‘Stretcher fences’ are found dotted around London, but their history is unknown to many. Some still have the body shapes in them made by the injured people they were used to carry, a historian has told the News.

Local historians are now trying to raise awareness of the fences’ hidden history after a set of the stretcher fences were removed from outside the East Dulwich Estate in Dog Kennel Hill.

Peckham-based architect Benny O’Looney said: “You can see how the wire frames often have these imprints, and are a bit concave, so they look a bit damaged. But these are actually where people’s body shapes have left a mark in them. You can see where people’s shoulders and hips would have been.

“I like the poetic thing about it, where you can see the ghostly shapes in the frames – of people who have been dead for decades but their imprint lives on in the streetscape,” the 52-year-old said.

Architectural conservationist Rosie Shaw, 33, said: “They’re a really good physical symbol of the war in London. They are a visible, observable reminder. I think showing people that is really important. The only other reminders like this that you can think of are places where there’s shrapnel in walls.”

Some 600,000 were made for use across the UK. And with a surplus of them after the war, many were ingeniously used outside new housing estates after they fell out of use by Civil Defence in 1962.

Southwark’s most prominent stretch of the stretcher railings is now along Peckham Road and Camberwell Church Street (pictured). But they can also be found outside the Oval Cricket Ground, as well as in Brookmill Road and Watergate Street in Deptford.

_______The stretchers being used in a Civil Defence Training Exercise, Camberwell c1940

Rosie and Benny have just launched a new website (www.stretcherrailings.com) where people can learn about the origins of the stretcher railings.

They are appealing for a local councils to get the few remaining sites listed, or for new planning regulations to call for their protection. Rosie added: “It would be nice to get stories from local people who must remember them being put in. People must have memories of them.”

Cllr Mark Williams, Southwark Council’s  cabinet member for regeneration and new homes, said: “Although there is no formal protection in place for these unusual forms of fencing, they do form a fascinating piece of local history, which is why the council works to preserve them where we can. On the East Dulwich Estate for example, as part of improvement works, we have removed fencing where it was in a very poor state due to extensive rusting and disintegration, but have preserved four of the fences outside Badminton House.”

I’d argue that the most significant area of these railings are the huge stretches across the Rockingham Estate and the nearby Tabard Gardens estate.

Southwark NewsNewsCalls to protect fences throughout south London, once used as stretchers in WW2