In the run up to the four man bobsleigh event, the News spoke with Southwark’s very own ‘human canon ball’ to find out how it feels to finally join Team GB 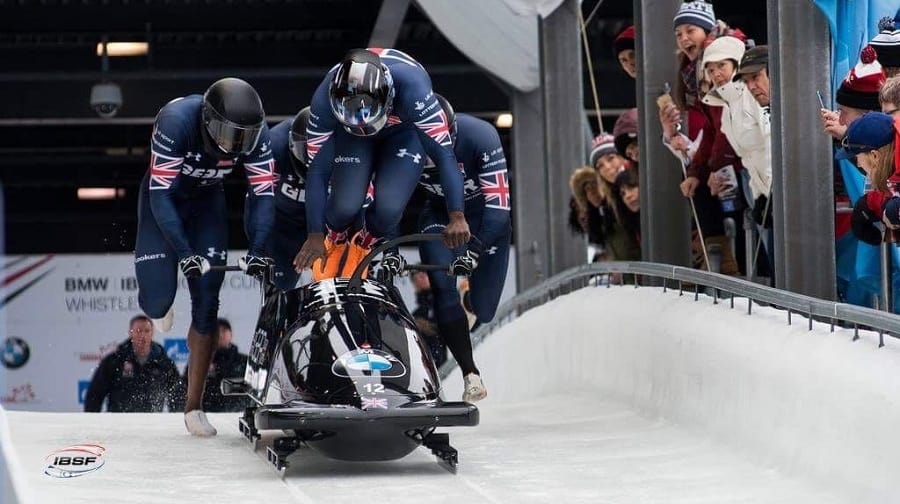 After years of training and fundraising – including appearances on Deal or No Deal and The Cube – Camberwell’s Olympic hopeful, Toby Olubi, will finally compete in his first Winter Games later this month in Pyeongchang.

In the run up to the four man bobsleigh event, the News spoke with Southwark’s very own ‘human canon ball’ to find out how it feels to finally join Team GB.

Toby, who has been training for five hours a day in the gym, said: “Over the past four years, having not gone to the last Olympics, I didn’t allow myself to get carried away with the prospect of going in 2018.

“I kept it all cool until that very moment when our director called me up to say I’d been selected.

“Like all guys I’d claim to not be an emotional person but that moment hit me more than any other, deep in the feels lol…”

The former Bacon’s College pupil, who is currently in Seoul, described the work that goes into getting competition-ready: “Bobsleigh is honestly the hardest thing I’ve ever done, every day is a challenge.

“You expose your body to -19°c temperatures, five times your body weight in g-force, excruciating gym schedules, the possibility of crashing and the 100 per cent possibility of a turbulent ride – think being in a washing machine and then being thrown into a roller coaster!

“You also have to manage the mechanics of the sled, which has you in the garage until 10pm most nights and up at 5am most mornings.”

He added: “However, it’s not about the presence of nerves but how you manage it.

“Also when I feel nervous I think about my family and friends, their importance to me means just one thought of them and I’m in ‘beast mode’. Nothing comes between me and my mother!

And describing how he got into the sport, Toby said: “Like most of my teammates I was a sprinter beforehand but I never progressed past county level.

“I thought about some of my attributes (probably being the fastest heavyweight in Britain), was invited to bobsleigh trials and did better than I could’ve imagined.

“The squad is awash with talent. We have some of the fastest guys in Britain on the team who’ve graced the same tracks as Usain Bolt himself.

“That’s the calibre needed to compete right now in this sport. Bobsleigh has come a long way since the Cool Runnings days.” Talking about his old school, Toby sang its praises: “I went to Bacon’s college secondary school and they did a good job nurturing my talents and instilling a belief that I could do anything. They heavily invested time and effort into developing me academically, physically and morally.

“From grabbing a bite in Bagel King, running around Burgess Park or studying in John Harvard Library, Southwark has always given me that warm homely, Mumma’s treacle pie on a Sunday morning feeling.

“As I get older my attention goes more and more towards what I’m leaving behind to the next generation. I’ve always been socially conscious but right now my legacy is just as important as winning a medal. My story is all about integrity, perseverance, hard work and attainment.

“It’s a story about a young boy from a council estate who got 5 A*s and 6 As in his GCSEs, graduated with a degree in Economics and Politics, went on three game shows to fund his Olympic journey then went on to become an Olympian… and I’m not done yet!”

Toby Olubi will be competing on February 24 and 25 in the four man Winter Olympics bobsleigh event.