Toby Olubi has already won £12,000 on Deal or No Deal in his bid to make the GB bobsleigh team in 2018 South Korean winter Games 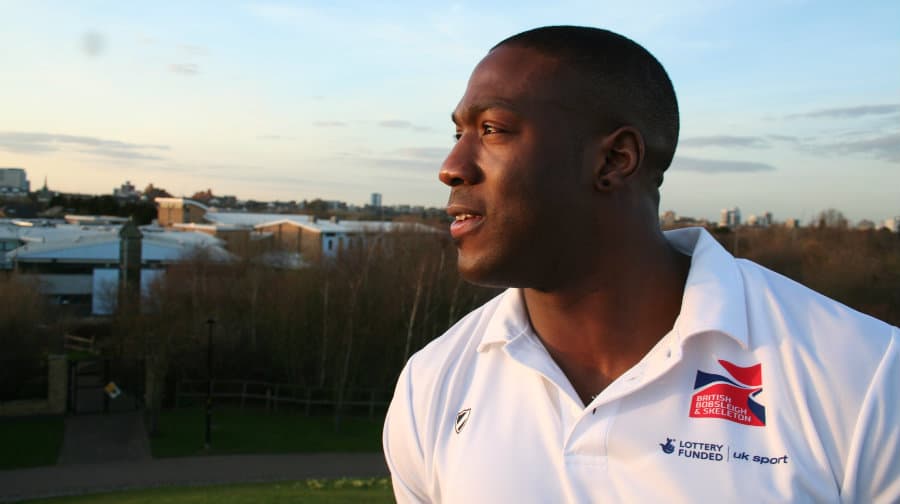 An Olympic-bobsleigh-hopeful is trying to compete in as many TV game shows as possible to fund his bid for the next winter Games with his winnings.

Camberwell man Toby Olubi, 28, has appeared on The Cube, and most recently Deal or No Deal, with a third game show in the pipeline.

The former Bacon’s College student, who has his sights set on the 2018 South Korea Winter Games in PyeongChang, started training as a sprinter whilst studying his A-levels at Saint Francis Xavier College, and then at Brunel University. But he was spotted by Team GB in 2013 for his stunning break-away speed.

“Sprinting is an incredibly important part of bobsleigh racing, there’s guys on our team who can outrun Usain Bolt over 60 metres,” Toby said.

“It’s the sprint at the start, and then the load when everyone needs to get in smoothly without getting in each others’ way and losing velocity. You need to repeat the motions to the point it becomes instinct.”

His most recent race was a fourth-place finish at the Austrian Bobsleigh World Championships on February 28, Britain’s best two-man-race finish in 70 years.

Toby, who lives with his mum in Camberwell, had his first TV appearance on The Cube in 2015, where contestants take on mind-boggling physical tasks for a £25,000-top-prize.

Toby had his hands on £10,000 before blowing his chances, trying to sort differently coloured balls into boxes in ten seconds.

His fortunes changed after bagging £12,000 on an episode of the Noel Edmonds-hosted Deal or No Deal that was aired on March 21.

“Noel was really sharp and very witty. You also spend a lot of time with the contestants, so you feel like a little family and you genuinely want to cheer each other on,” Toby said

He also revealed there is another game show he is set to appear on “very soon”, but insists he has orders not to say what, when, or even which channel it will be on.

The money he makes will go towards transport, equipment, food, accommodation, and all the support you can imagine a world-class athlete requires – which does not come cheap.

Toby used to foot the bills working as a supply-teacher for a school in Chiswick. But he knew it was a gig he couldn’t juggle with a schedule that demands he attend training at Bath University – the UK’s only bobsleigh track – and half the year competing abroad.

“It’s a lot of responsibility being a teacher for young kids,” he said, “and it’s not fair on them if I’m away focusing on training. Children need continuity in their teaching.”

The camera-baiting but humble athlete is “adamant” Team GB will do well in two years’ time.

“We have two two-man teams and two four-man teams, and each one of them could get a medal,” Toby said. “We are rapidly becoming one of the best bobsleigh nations in the world.”