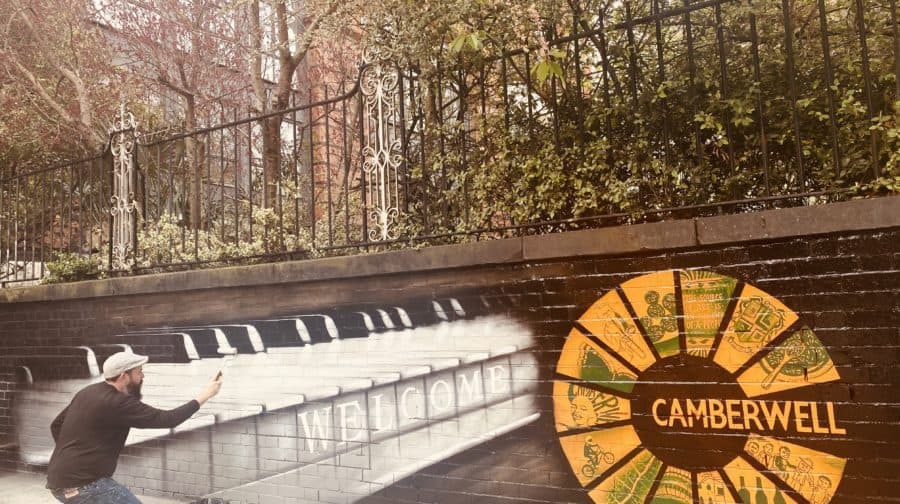 A large new mural was painted in Camberwell over the bank holiday weekend.

The artwork, on 26 Peckham Road, shows the keyboard of a piano – a nod to the building’s history as a piano factory. Artist Lionel Stanhope has painted several pieces of street art in the borough, including a mural outside Millwall stadium the Den last summer.

A QR code will be added to the piano factory mural later in May. If you scan the code with the camera on your phone, you will be taken to a short history of music in Camberwell. You will also hear clips from Romantic composer Felix Mendelssohn’s Spring Song (also known as Camberwell Green and inspired by his time in the area) and the Basement Jaxx track ‘I live in Camberwell’.

The mural painting was organised by the local Camberwell Identity group, after consultation with Piano Factory residents and the 23rd Camberwell Scouts group. Money came from a crowdfunding campaign which raised over £1000, of which £500 was from the Camberwell Society.

Kelly Blaney, who chairs Camberwell Identity, said: “Camberwell Murals is part of building the buzz around Camberwell [,] encouraging people to explore more of our diverse area and attract new customers for our local businesses.”

This is the fourth mural organised by the Camberwell Identity group: one on the Camberwell New Road entrance to Camberwell, another at Denmark Hill station and a third on Wren Road at Butterfly Walk. We reported in March on the group’s plans to add the piano factory painting.