Former councillor fled Kathmandu shop as floor ‘heaved up’ below her 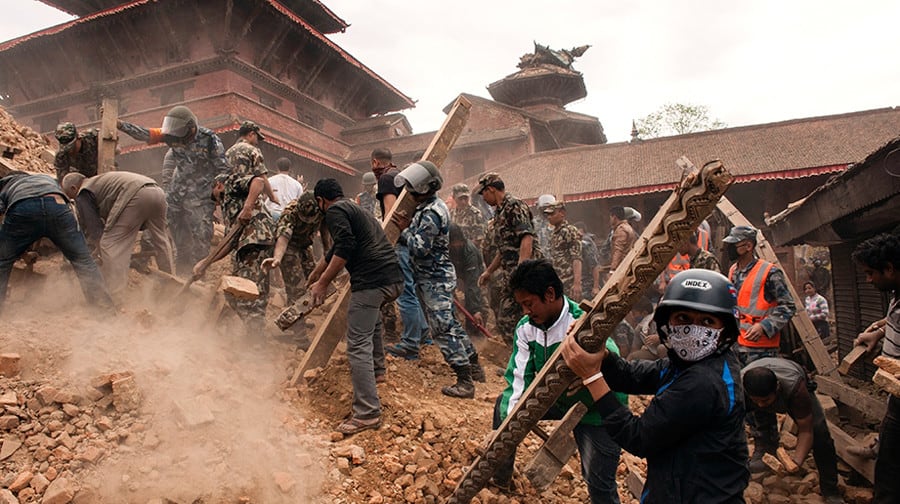 Rescuers dig through the rubble Photo:?IFRC and Carl Whetham

A 71-year-old Camberwell grandmother has described how she was caught in the huge earthquake which has brought devastation to Nepal, sleeping rough in case aftershocks brought her hotel down.

Veronica Ward, a former Southwark councillor, was in a shop in Kathmandu on Saturday after travelling to the South Asian country with her Camberwell Thai Chi club.

She heard a loud rumbling under the floor, which she described as sounding like a tube train passing below, and moments later the shop floor “heaved up” and “everything was going sideways and falling out of the shelves” as the 7.9-magnitude earthquake hit. The shopkeeper shouted for everyone to get outside, where the grandmother-of-two saw people running for cover and a telegraph pole crash down on to a moving car.

“I was shaking,” said Veronica, who served as a councillor for South Camberwell from 2002 until she stepped down in 2014. In the eerie calm following the initial quake, Veronica made her way back to her hotel. One of Veronica’s party was in the badly hit Durbar Square, where she saw a tower fall, killing people trapped beneath. “It was a frightening experience,” said Veronica, who was impressed by how quickly the Nepalese services responded. Almost immediately she saw the police, the ambulance service and even girl guides and scouts out in their uniforms on the streets, helping to cordon off unsafe areas. Thankfully Veronica’s hotel was still standing, but with numerous aftershocks registering up to six on the Richter scale, it was not safe to go back inside.

Veronica and her group stayed the night on a scrap of wasteland close to the hotel, open to the elements but at a safe distance from nearby buildings. “You’ve got to get to a point where nothing’s going to fall on you,” she said. A neighbouring shop-keeper came around with a bunch of bananas for the group and the hotel staff stayed through the night and made tea for them on a gas stove on the Sunday morning. “People were sharing what they had. They were wonderful. They all had their own families to worry about,” said Veronica, who was able to get a text to her family in Camberwell, to let them know she was safe. “I was worrying about how my family would manage if I didn’t come back,” said Veronica. “Whatever you have, in those situations you can very quickly have nothing. That makes you really stop and think about what’s important in life. That people have concern for other people whatever happens – nothing else really matters actually.”

Veronica (at front, left) on holiday before the quake struck

On Sunday evening Veronica was taken to the airport, where thousands of people amassed in the hope of escaping the carnage. “There were a lot of people and just a few Nepalese staff, who were working to the point of dropping and they must’ve had their own family concerns. I’m full of admiration for those people,” she said.

Veronica arrived back to her two grandchildren in Camberwell Grove on Monday morning and saw the extent of the devastation on the news. “It’s much worse than I thought,” she said, after finding out some of the places she had visited on her two week holiday had been largely flattened. “It’s very sad,” she said.

“We were in the ‘old town’ the day before the earthquake and now it’s gone. People lost their lives there and we were there just the day before. We were very lucky,” added Veronica, who is now appealing to the people of Southwark to give generously to the Nepal earthquake emergency fund, as it is “absolutely vital” that help be sent to the millions of people who have been left without food or shelter.