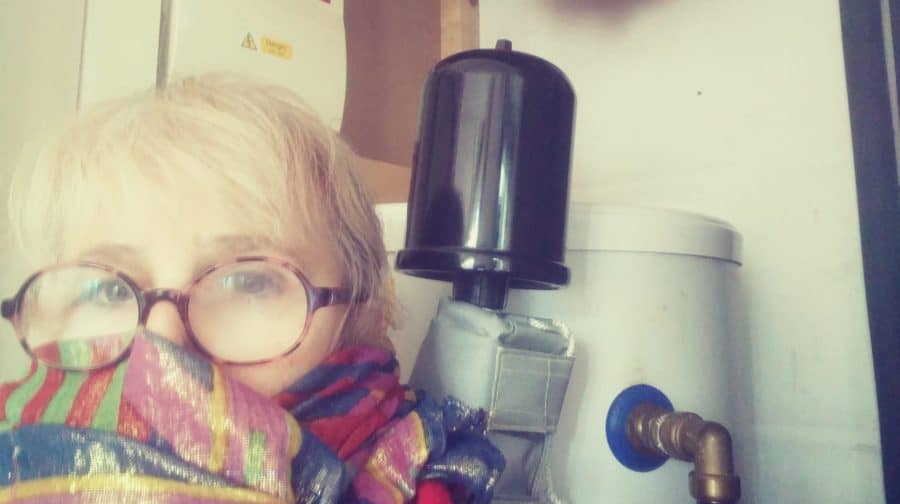 A leaseholder who has challenged Southwark Council in court for times over major works bills has been told she could have to pay £45,000 toward a new roof – just six years after being charged £25,000 for a district heating upgrade.

Michelle Baharier, who bought her Gilesmead Estate council flat in 2008 through right to buy, told the News she had spent years in therapy and receiving specialist help from the Maudsley Hospital after nearly losing her home in 2015 while disputing an extraordinary major works bill.

Despite being heavily in debt, she and other owners in the block – many of whom are remortgaged to the hilt – have been told Gilesmead, which has 40 flats, now needs a whopping £1.4 million spending on work to fix the roof.

Included in the staggering estimated costs – which could run far higher – are £90,000 of unspecified ‘COVID-related fees’, £42,000 for a temporary office site for contractors to use over 30 weeks, showers and toilets, and even a landline installation.

Michelle has previously successfully disputed being charged £7,000 for her front door being repainted – eventually haggling Tooley Street down to £1,500 – and was also charged £1,000 for communal lighting changes, all on top of a £3,100 annual service charge that has more than doubled in a decade.

She said she had no idea how she could pay up or what the future will hold.

“There is just no accountability,” she said. “As leaseholders we have no control. They don’t care if you end up with a bad product that is hugely expensive – I have no rights.

Michelle successfully won her case against the council’s district heating plans at a first tier tribunal. But after a challenge was brought by the council once again, she then found her costs escalating and ended up having to pay the full sum – with £6,000 interest.

“Money worries are the biggest mental health issue and they could have wiped off that interest but no, they went after me”, she said.

“The Labour Party is campaigning for leasehold to be outlawed and here they are at Southwark Council spending more on legal teams going after people than getting it right in the first place.

“I’m not questioning major works and my lease makes it clear we have to pay for them but the costs will be ‘reasonable’.

“If the council wants to work with us then they have to do things in a transparent way.

“I want them to take some of this money and give it to us leaseholders to pay a surveyor, an expert, who can go through it with a fine tooth comb and cut out all the fat and what I think is double charging.

“They should guarantee that no leaseholder will lose their home, and when works aren’t up to standard claim on the insurance.”

As this paper has reported, council leaseholders are in a particularly difficult position financially because although they often have bought flats with the right to buy discount, many are unaware of the costly burden of often short notice major works.

The council is legally obliged only to charge for actual expenditure, meaning it cannot build up reserves, either.

But what counts as value for money, and how competitive quotes are is another matter.

Leaseholders are offered plans for repayment and loans from the council – but these also come with caveats including being unable to challenge the bill in court. If they go unpaid, the council does have the power to repossess.

Michelle believes lack of maintenance, underinvestment, and an unwillingness to drive down costs is the real reason for spiralling costs.

“You have more rights as a tenant and are at much greater risk of becoming homeless as a leaseholder,” she added.

The reason she bought her flat in the first place was to benefit from a government grant for new heating.

But after being told she had no choice but to remain on the council’s district heating network, she has now helped pay for a new system – to replace one in place since the 1960s – that has now broken down three times this year. As of Tuesday, she had been without heating for three days, with no automatic right to compensation. 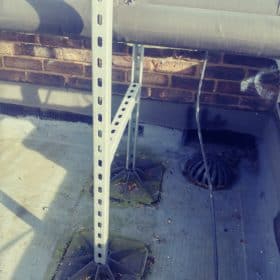 The roof – which now needs replacing.

She believes it is the new district heating system, which saw pipes installed on the flat roof of the block, caused damage to the building and explains why a new roof is now needed after a series of leaks.

The exact scale of the work needed, however, is still unclear despite being scheduled to start within three months.

Her biggest concern is that there does not seem to be anyone in the council advocating for leaseholders and making sure every cost is justified.

“There is even £800 for a new laptop – why are they charging us for new items and not just a proportion of wear and tear?” she asked.

“They even have included costs for a fax machine. Who uses landlines and fax machines nowadays?”

In response to an enquiry from the News, councillor Stephanie Cryan,  the new cabinet member for housing, said the predicted cost was an “awful situation for residents to be in”.

“I know the estimates and bills to leaseholders are often shockingly expensive,” she admitted.

“We do support leaseholders with a range of ways to pay, and try to be frank and honest at point of sale about the responsibilities of being a homeowner and how expensive it can be.

“It is unfortunate that resident leaseholders have to foot the bill for works when they are necessary, but it’s not something we can avoid doing – we have to maintain people’s homes and in this case, after already carrying out works put in a new heating system, a new roof is now required.

“We now also need to include estimates for extra costs as we work safely around COVID-19, with extra security, PPE and cleaning contracts.  We will continue to talk to residents about the next steps forward, and they can see where we are with works or costs whenever they wish.”

Unfortunately, Non-acountability is a curtain behind which block managing agents hide behind and spend leaseholders money knowing that it is difficult for leaseholders to complain in courts due to more costs and lack of proper documentation. eg accounts are published six months after the end of year which may include expenses raised almost 18 months earlier.

Ealing Council are doing the same thing, It is not the fact you are liable as a leaseholder it’s the costs and frequency that are unreasonable. Leaseholders have no voice.

Shenanigans. Talking about bad landlords. Southwark council trumps them all.