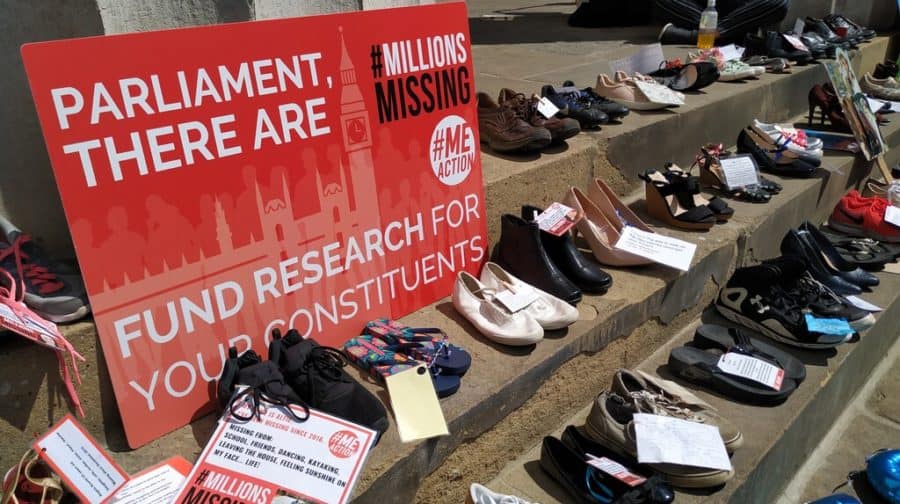 Shoes laid out on the church steps, representing people suffering from ME (c) ME Action UK

Lines of empty shoes were left outside Waterloo’s St John’s Church on Monday lunchtime as ME sufferers called on the government to fund more research into the debilitating illness. Isobel on holiday before she became ill, on holiday in the Pindos mountains in Greece. She used to love hiking, rambling and mountaineering

Myalgic Encephalomyelitis, known as ME, is a chronic disease affecting around 250,000 people UK. Despite its devastating effects, there has been comparatively little funding and research into its causes, and new treatments.

The display of shoes was part the global #MillionsMissing campaign, with the empty shoes acting as a stark symbol of how millions of people with ME across the UK and worldwide are left unable to work and live their lives in full.

It is estimated that 95 per cent of people with ME do not recover. A quarter of them are unable to leave their homes or even their beds due to the condition, or need to be tube fed.

Isobel, aged 60, from Camberwell, has lived with ME for 25 years, after first becoming ill in the early 90s when she was otherwise fit, healthy and active.

Having lived and worked abroad, studied languages and travelled extensively, she is now mostly housebound.

A member of the South London ME Support Group and editor of its newsletter, Isobel is backing the #MillionsMissing campaign.

“I often wonder what my life might have been if things had been different perhaps there would have been marriage, children, a fulfilling career, owning property, foreign travel” she says.

“I try to take pleasure from small things such as the sounds of nature, birdsong, rustling leaves, a trip to the park or a gallery on a better day, and most of the time manage to keep my spirits but sometimes it is very hard.”

Like many ME sufferers, Isobel has found the lack of treatment options and understanding of the disease frustrating.

One of the most commonly advised treatments, graded exercise therapy, is believed to actually make ME worse – although it can help people with other types of chronic fatigue, such as those whose condition is linked to clinical depression.

She says over the years her GPs have been supportive but their hands have been tied by the lack of options.

“I feel a lot health professionals do wish there was more they could do and are perhaps as frustrated as we patients are, she says.

This, however, isn’t always the case: “There are stories of patients who’ve been hospitalised and nurses who have not understood their needs and level of disability and forced them to walk to the bathroom not believing they are genuinely unable to, and of children being taken from their families by social services,” she told the News.

Isobel says labelling the condition as ‘chronic fatigue syndrome’, has helped create the misconception that sufferers are ‘just a bit tired’.

“Some family members and friends have found it very difficult to understand my illness which is upsetting,” she admits.

“I’ve had one imply it was ‘a lifestyle choice’ – as if. I can think of plenty I’d much prefer!

“But I do think it is a difficult illness for others to understand, and for us sufferers too. You can look reasonably well one day, getting by on an adrenaline rush, and perhaps manage a short social outing or visit from a friend, but what they don’t see is that you’ve rested up for days in anticipation, and then collapse in a heap afterwards, for however long it takes. In that sense it’s a hidden disability.” The rally in Waterloo

But there have been signs of a sea change.

In January, a debate at the House of Commons saw more than 40 MPs support more funding for biomedical research; the suspension of graded exercise therapy and cognitive behavioural therapy as treatments; and back updated training for medical professionals to protect families from unjustified child protection cases.

Although research could help more patients in future, right now there is also a need to help those struggling to work and live independently – especially in welfare assessments.

“The last thing any of us deserve is to be mislabelled as shirkers or wasters,” she says.

“Let’s hope the ‘yuppie flu label of the 80s is well and truly buried.”

For more information about the Millions Missing campaign, visit millionsmissing.meaction.net

If you have ME the south east London support group can give information and support. Visit www.selmesg.org