Camberwell Station back on track? SE5 forum apply for ‘Restoring Your Railway’ funding 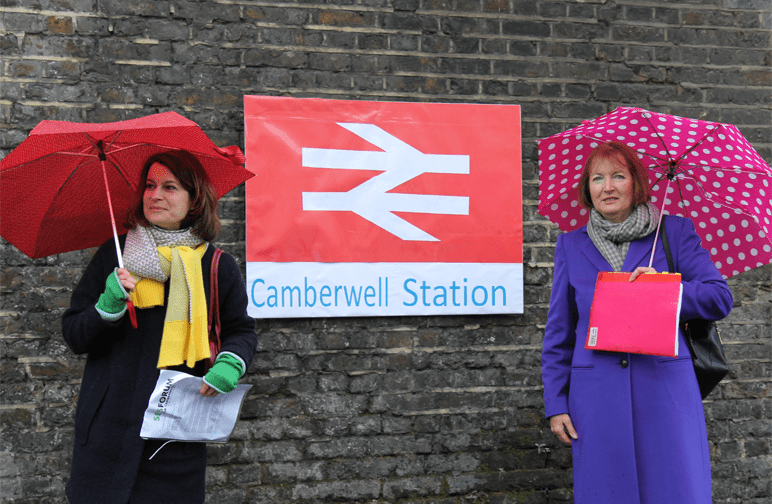 Helen Hayes and Harriet Harman outside the old Camberwell Station

SE5 residents have submitted an application for funding from the Department for Transport to build on a business case to push for Camberwell Train Station to reopen.

The bid was submitted by the SE5 Forum with backing from MPs Harriet Harman and Helen Hayes to the ‘Restoring Your Railway’ fund, set up to analyse sections of axed and disused tracks – including those victim of Beeching’s cuts in the 60s – to see where there is potential for new capacity.

Camberwell’s station closed to passengers in 1916 and goods services ceased in 1964. Funding would help with plans including building costs, timetabling options, early design work and feedback from residents.

Their long-running campaign to reopen the historic station had a ‘major setback’ in 2018 when a TfL study suggested any benefit to the immediate area would be outweighed by the impact on longer distance commuters – and ultimately not the best use of funds.

Barbara Pattinson, Chair of SE5 Forum, said: “We would like the judges on the Restoring Your Railway award panel to know that Camberwell may be an inner city area, but the quality of transport and access is relatively poor.

“Helping us to develop the business case for re-opening Camberwell train station would put us on track for improving facilities which would really help local residents, as well as all the millions attending King’s College Hospital and the Maudsley Hospital.”

Helen Hayes, MP for Dulwich and West Norwood, says: “Along with my constituency neighbour Harriet Harman MP, I met with the Minister for Transport, presenting him with a petition signed by more than 2,000 of our constituents, asking for the train station to be re-opened.

“So we were both delighted to sponsor this SE5 Forum bid to Restoring Your Railway.”