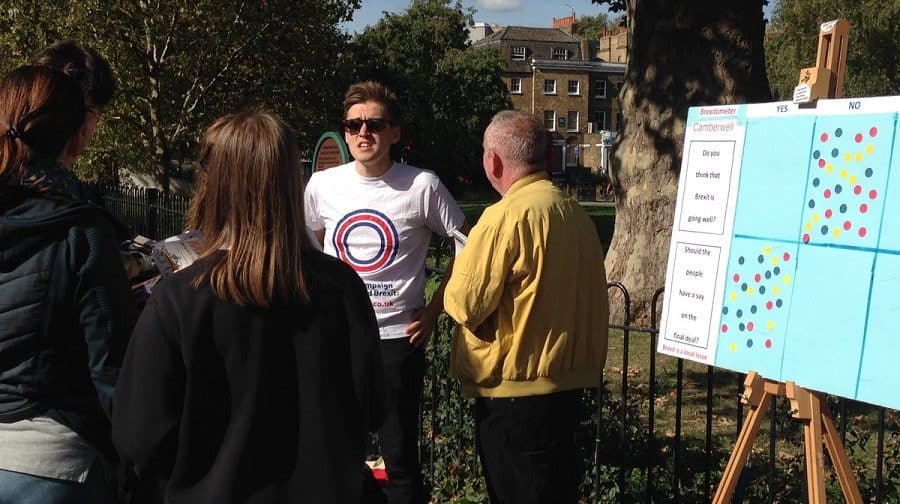 Pro-EU campaigners were lobbying in Camberwell today for a ‘people’s vote’ to give the public a final say on the UK’s Brexit deal.

The Southwark for Europe group set up a stall with a ‘Brexitometer’ for residents to share their views on how the negotiations are going.

The group has joined a UK-wide campaign lobbying the government to give the public a final say on the UK’s Brexit deal – attracting both remainers and leavers to its ranks.

The stall on Camberwell Green was held to coincide with today’s (Saturday, September 29)  People’s Vote National Day of Action.

Across the country, more than one hundred community groups have staged events in support of the people’s vote.

Rob Griffiths, from Southwark for Europe, said: “Southwark overwhelmingly voted to remain in the EU in the referendum and we have been hugely concerned about the lack of progress that has been made in ensuring a good deal for people in this borough.

“Many of the promises made will not be delivered and we believe that if people have changed their mind then they should be given a chance to have a say on the final deal.

“We have been encouraged by the momentum that has been building over the summer in favour of a People’s Vote and are now preparing a big push across Southwark to raise awareness among both leavers and remainers that a vote on the final deal is becoming more likely as the impasse in government continues.

“There will be a much greater presence across the borough, engaging with locals about their concerns, as we push for this vote.”

The day comes after mass rallies were held throughout the summer in Bristol, Edinburgh, Newcastle, Cambridge and Cardiff.

They have had lots of conversations about the need for a #PeoplesVote on the #Brexit deal, and lots of support for the #PeoplesVoteMarch on Oct 20th too

On October 20, campaigners will stage what is expected to be the largest Brexit march – with more than 100,000 people anticipated to join.

After the local elections in May this year, the reshuffled council cabinet saw councillor Victoria Mills become cabinet member for finance, performance and a new portfolio – Brexit.

Skills gaps, the EU workforce and uncertainty around immigration have all been raised as particular issues within the borough, and ones which a cross-party Brexit panel chaired by Cllr Mills has the unenviable task of planning for in the event of a no-deal exit from the EU.