“I don’t know what I will do when I hear her talk. I will probably just cry.” 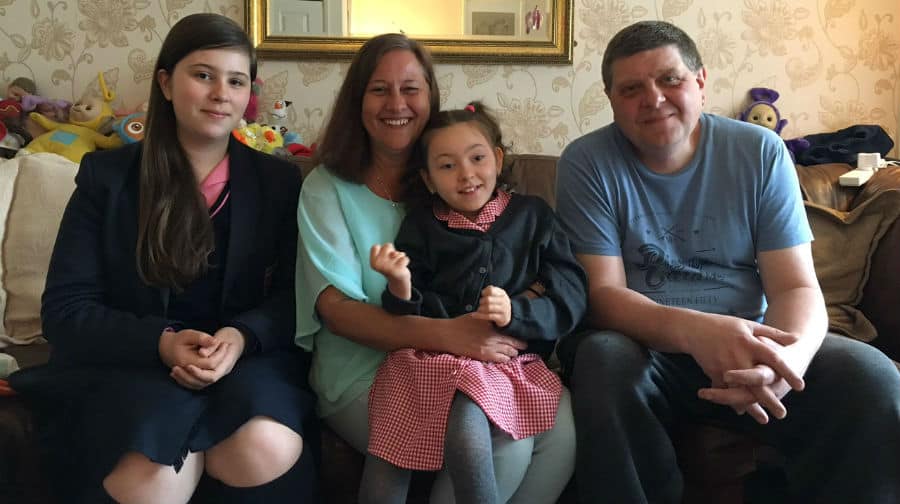 A DISABLED Bermondsey schoolgirl may soon be able to tell her family she loves them for the first time, as a campaign to raise money for a computer to help her speak gathers momentum, writes Alex Yeates…

Ruby Longman, a pupil at Alfred Salter Primary School, suffers from the rare Rett syndrome, which has prevented her from walking and talking since she was a baby.

Now ten-years-old, her family are determined to get an eyegaze computer to help Ruby talk through her eyes and finally have a voice of her own.

It is possible to apply for the computer on the NHS but Timi said it could take anywhere between “two and three years”.

More than £2,500 has already been donated by friends and family, but £10,000 is needed in total to get the computer to suit all of Ruby’s needs.

Timi Samples, Ruby’s mum, said: “When I heard how many people had already donated I was surprised and couldn’t stop crying.

“It is really hard to ask for help as a family. We are very independent and are used to getting on with it ourselves.

“We were worried about doing it as it can be frightening but the response has settled our fears.

“We have heard from family and friends who we have not heard from in a long time. One cousin rang me who I last saw when she was turning 21 – she’s 45 now – saying she will be donating in the next two weeks.”

As Ruby cannot walk, Timi and a carer have had to carry her up and down stairs everyday, which has started to take its toll, with Timi missing two discs in her lower back.

Speaking about how difficult it was when Ruby was first diagnosed, Timi said the family went through a “really big grieving period” as they felt she was slowly passing away.

But the thought of being able to communicate with Ruby after so long has filled both her parents and sister with joy.

Timi said: “We originally thought she wasn’t able to understand what was going on around her. But now we believe she is just trapped.

“I think it will be quite emotional for her to be able to speak to people.”

Lilly-Rose, Ruby’s thirteen-year-old sister, said: “I don’t know what I will do when I hear her talk. I will probably just cry. I would ask her what it is like for her – for her to finally be able to talk to us.”

Ruby lost the ability to talk when she was diagnosed at two and half years old and with time lost her ability to show emotion.

But she still has control of her eyes and the chance to talk with the help of a computer that will track her gaze.

Larry Longman, Ruby’s dad, said: “It is going to be really weird for me because I have not heard her in so long. It is really important to have a voice in this day and age, so it would be amazing.”

Ruby’s family have lived in temporary housing for the past five years, as they have struggled to find a home suitable to their needs.

Neil Coyle, Member of Parliament for Bermondsey and Old Southwark, said that he’d be willing to see if he could help with the family’s situation.

He said: “It is shocking that Ruby and her family have been waiting for a home for over five years in their circumstances.

“The housing crisis has been ignored too long – and the need for suitable homes to be built for families like Ruby’s is exacerbated when not enough homes are built full stop.”

Rett syndrome is a unique condition that affects one in ten thousand females, with Ruby being one of two young girls suffering from the disease in the borough.

Last week the News reported that young model Harvey Eldred, seven, had donated £100 of his pocket money to both Ruby and Harvey Brown, seven, who suffers from Morquio syndrome.

To join in and help raise money for Ruby’s computer, visit https://crowdfunding.justgiving.com/rubyeyegaze