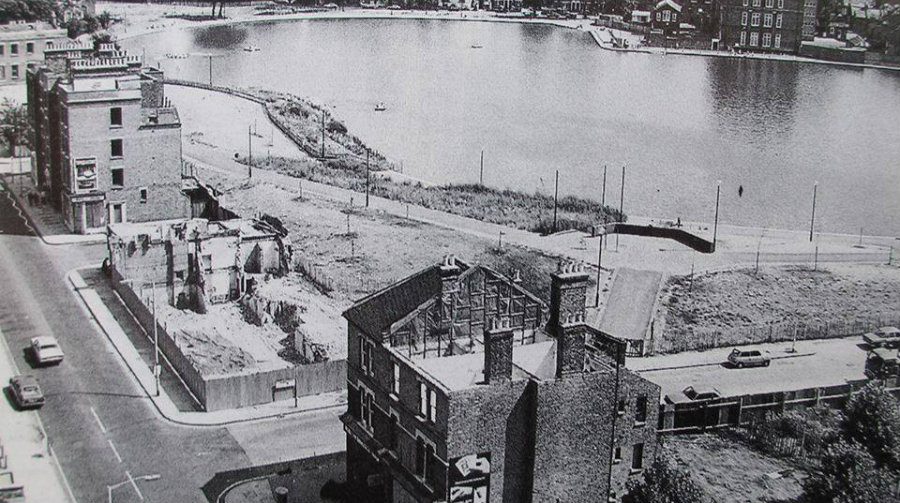 A archive photo of the bomed building (centre left) where the officers saved 12 people.

A campaign to create a memorial plaque dedicated to twelve Walworth residents who died during a World War One zeppelin raid – and to the three brave PCs who prevented the death toll from rising even higher – has been launched by a local historian.

Stephen Bourne is calling on Southwark Council to replace a former memorial to the tragedy, which was located in Calmington Road before the street was cleared to make way for Burgess Park.

He said: “It is heart-breaking stuff, both because of what happened, which was terrible, but also because this memorial has now gone missing – and WW1 memorials to civilians are not all that common.”

During the night of October 19, 1917, a German zeppelin dropped a 300-pound ordnance, known as an ‘aerial torpedo’, onto the corner of Calmington Road and Albany Road.

Twelve people, including two children, were killed in the explosion, while at least another dozen were left trapped in the basement of a building with a fire raging above. Despite the threat of another explosion due to a gas leak, Inspector Edward Wright, PC Jesse Christmas and PC Robert Melton, who was actually off-duty at home just a few houses down from the blast, raced to the scene.

Mr Bourne said: “It must have been terrifying, voluntarily entering the inferno, not knowing what to find. They really put their lives on the line. It was horrifying – people remember the Blitz but men, women and children died in London during the First World War too.”

The brave Walworth bobbies cut a hole in the floor and dropped down into the basement, where they managed to find two children in the smoke and chaos. Ignoring the threat of the building collapsing and the near-overpowering gas fumes, they led the children and a group of shell-shocked adults to safety.

An eye-witness spoke of “the great bravery” of the three men in a letter to a local paper that week.

He said: “I can assert that their conduct was exemplary, deserving the highest possible praise and public gratitude. Already the Sub-Divisional-Inspector’s brave action in rescuing twelve people has been acknowledged elsewhere, but may I add that not until he collapsed did he cease his human work. Moreover, his temporary breakdown did not deter him, for within the space of three-quarters of an hour he was again taking a good part in the work commenced and directing affairs with that skill and coolness which belongs only to heroes.”

Inspector Wright was awarded with the incredibly respected Albert Medal, while the other two officers were decorated with King’s Police Medals. However, Mr Bourne said that a permanent memorial was needed in the community, to pay tribute to both the residents who lost their lives on that October night nearly a century ago and the three selfless policemen who put themselves in incredible danger to try to save them – one of whom, PC Melton, was actually sacked in 1919 for taking part in a police strike.

Cllr Peter John, Leader of Southwark Council said: “We are still planning for a rededication of an appropriate memorial, to replace the one moved from Calmington Road, as close as possible to the original location and in time to commemorate the centenary of the bombing in October 2017. I look forward to being able to update the community on these plans as soon as we can.”