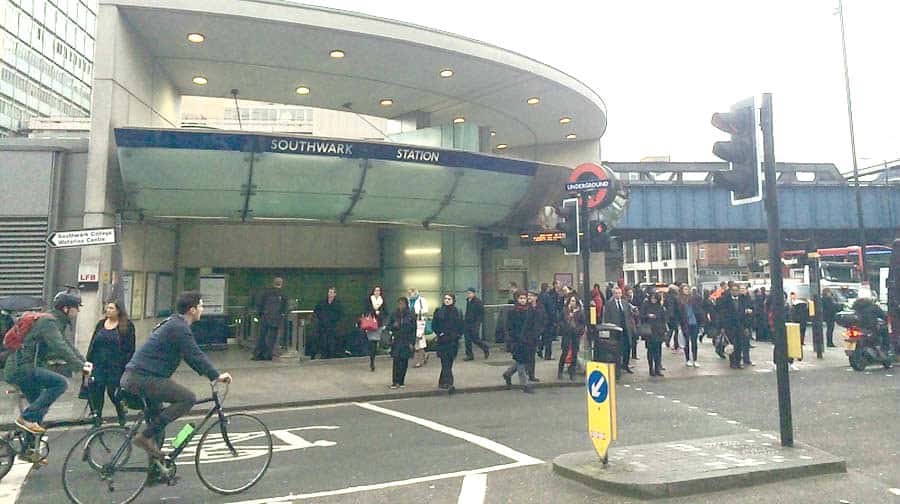 The award-winning Southwark Underground Station is under threat from plans to build a 30-storey skyscraper above it, writes Becky Morton…

The Twentieth Century Society has condemned Transport for London’s plans, which could involve the demolition of the circular ticket hall and lobby to the rear to make way for 300 homes along with restaurants and shops. The tube station itself would remain.

The Society has launched a campaign to save the station from partial demolition after its application to have it listed was turned down on the advice of Historic England.

The decision was made on the basis that the parts of the station under threat, the ticket hall and lobby, were not considered individually to merit Grade II* listing. Buildings of less than 30-years-old generally cannot qualify for listing at a lower grade.

Tess Pinto, Conservation Adviser at the Society, said: “We strongly disagree with the judgement that the ticket hall itself is not of a high enough calibre to warrant listing, but our major concern is to do with the way the decision was reached. If a building is under threat, it should be assessed as a whole and that does not appear to have been done here – despite the fact the listing report explicitly states the station is a coherent and unified work of architecture.”

The station was originally designed to carry an eleven-storey building over the ticket hall, but this was never built and planning permission has since expired. The site currently houses disused office and empty space.

The circular ticket hall, which includes a 40m glass wall consisting of 660 pieces of blue glass, was designed by the late Sir Richard MacCormac as part of the Jubilee Line Extension of the late 1990s.

Graeme Craig, Director for Commercial Development at TfL said: “We are looking to develop the area above and surrounding Southwark Tube station and are in discussions with adjacent landowners to understand what kind of development would provide the greatest benefit to the area.

“Our proposals include a range of improvements to the station, including better and easier access for customers. Any changes would preserve and protect the iconic elements of the station and would sensitively consider the impact on the local area.”