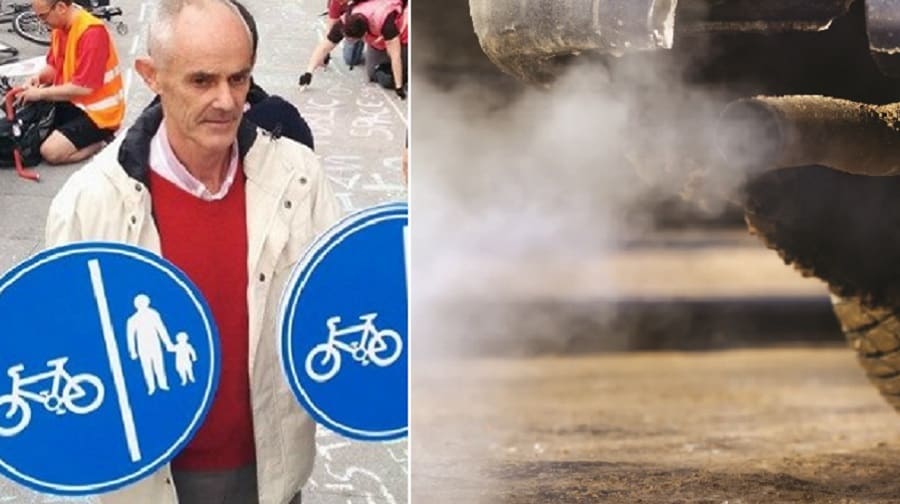 An award-winning environmentalist has called on Southwark Council to ban the use of private cars on high pollution days to protect children from toxic emissions, writes Kirsty Purnell…

McCarthy believes that Southwark Council has a “moral obligation” to order private vehicles off the road on high pollution days.

“You can’t just say that the elderly and the kids have to stay indoors so that the cars can drive,” he said. “It’s terrible. It’s not acceptable.”

Even without last week’s top-level health warning, Southwark has the highest number of schools in London with illegal limits of Nitrogen Dioxide (NO2) – a harmful gas emitted by road transport.

Fifty five local schools breach the legal limit of NO2 – 45 primary schools and 10 secondary schools – meaning that 12% of London’s 443 above-the-legal-limit schools are in Southwark.

Pollution exposure can lead to a number of long-term health problems for children, including stunted lung growth, poor brain development and asthma.

It is estimated that around 9,000 Londoners a year die prematurely from exposure to the toxic NO2 gas.

“[Council Leader] Peter John needs to wake up and do something,” said McCarthy, who also proposes increased investment in protected cycle paths and more corporate responsibility around employee travel.

Southwark Council, however, point out that they are already running a comprehensive range of initiatives to tackle the air quality issue. Work includes a commitment to investing £30m in cycling and walking improvements over the next five years and lobbying Transport for London (TfL) to extend the Ultra-Low Emission Zone (ULEZ) to cover the whole borough.

The council also highlight the fact that cleaning up the air is the job of “all levels of government”, as well as local businesses and community groups.

Councillor Ian Wingfield, cabinet member for environment and public realm, said: “Air quality is one of the council’s key priorities and we’ve been consistent in our approach to tackling the issue locally. The levels of air pollution around our schools may raise concerns, especially those located near busy roads. This is why we’ve pushed TfL, who manage red routes, to extend the Ultra-Low Emissions Zone (ULEZ) to cover the whole borough, worked with schools to introduce travel plans to encourage walking and cycling and recently launched an anti-idling scheme in partnership with City of London and the Mayor’s Office.”

Southwark Green Party Chair, Eleanor Margolies, agrees that cleaner air calls for “action at all levels,” from parents, to schools to the Mayor, as well as the Council.

However, she is critical of the Council’s Draft Air Quality Strategy and Action Plan – which closed for public consultation on Tuesday – for being weak on details, such as timeframes and measurable objectives. She believes action is imperative.

“At this point, we already know the impact of pollution. We shouldn’t be vaguely raising awareness anymore, we should be saying what we can all do,” she said.

*Have you or your family been affected by air pollution where you live? Email your story to editorial@southwarknews.co.uk

What about planes mate…go after the big corporations OH YEAH you can’t touch them so you wanna serpress the small man.
I BET YOUR NEIBOURS LOVE YOU…

Most cars in Southwark are not local residents, bloody right get them off the road! We’ll cycle or take the tube like proper Londoners 🙂