Building, once known as Central Hall, has had many uses over the years 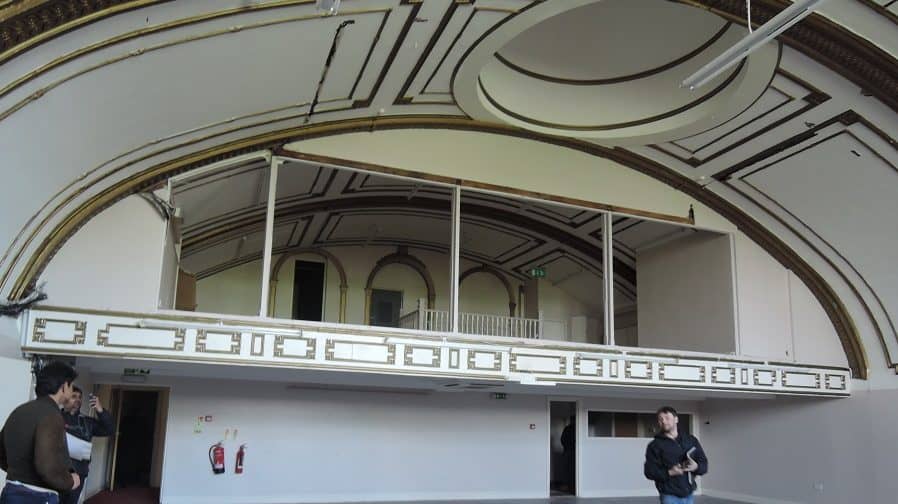 Inside the hall (c) Peckham Vision

Heritage campaigners are hoping a historic hall ‘discovered’ on Peckham High Street can be saved by its new owner, after the building was bought by a mystery buyer at auction.

According to the Peckham Townscape Heritage Initiative, number 43 Peckham High Road was once known as Central Hall, with enough capacity for 1,000 people.

The Victorian building was opened on November 11, 1884, by The People’s League, a social and religious mission.

Throughout the next century, the building had several lives as a Baptist Hall, a cinema, concert-venue, nightclub and casino before its latest incarnation as a ‘solutions centre’ by ‘Crusaders Ministeries International’.

Historic meeting place discovered at 41/ 43 Peckham High Street. Up for auction today but sold in advance. Fascinating history – https://t.co/8hPVoREyFg. Will @Savills please put the new owner in touch so we can discuss future uses of this heritage? @PeckhamHeritage @thevicsoc pic.twitter.com/T4SafqR4Hg

The building was auctioned by Savills agents this month to an unknown buyer but, shortly before being sold, heritage campaigners gained access and discovered the historic hall was still in existence, and now have called on the new owner to keep the building for public use.

Eileen Conn, from Peckham Vision, told the News: “This is not just an attractive part of our heritage with a fascinating history. It is also a significant asset for the town centre.

“It has much potential as a public meeting place for performances, trade fairs and all kinds of things.

“We hope that Savills will put the new owners in touch with us so we can discuss the way the building’s value can be realised for the new owner and the town centre.

“Look for example at the success now of the Bussey Building and Copeland Park, and the Peckham Multi Storey former car park, both once destined for demolition.

“These are just two examples of buildings rescued and recycled by our actions. We hope that 43 Peckham High Street can be added to the list.

Savills told the News: “We have passed your enquiry on to the buyer who will be in touch should they wish to comment on the purchase or speak with the local heritage group.”