Over 1,800 people have signed petition calling for Camberwell's old railway station to be reopened, and TfL have said a report on its feasibility will now be published in September 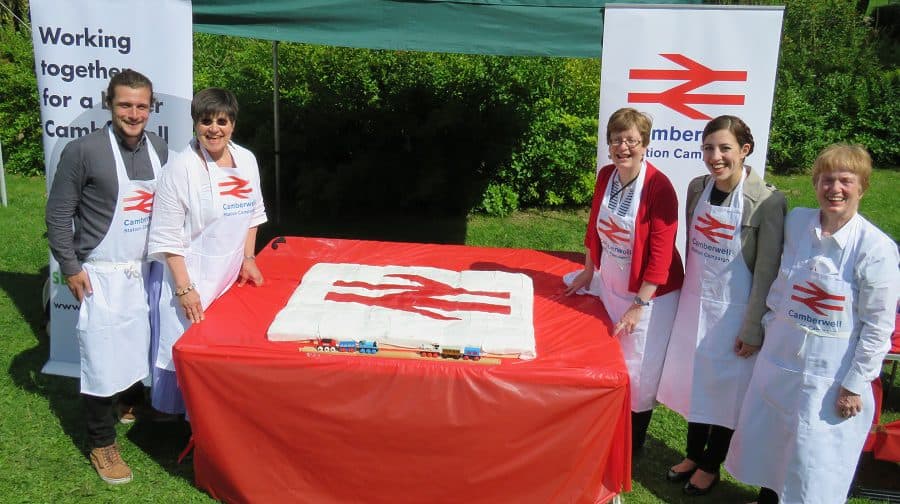 Campaigners have kept up their calls to reopen Camberwell Station by making a giant cake in the shape of the (hopefully) new station’s logo.

The sprawling block of sponge and icing was served up at the Brunswick Park Fete in Camberwell, on Saturday August 5.

Sophy Tayler, who lives by Myatts Field Park, told the News: “I think we could feed a train-load of people with it.

“We’re bringing the community together to have some fun. We wanted to get everyone in Camberwell to think about the railway station in a positive way.”

The News recently reported that a crucial report for reopening the century-old station – due to be published by TfL after being signed off by Network Rail and Southwark Council – is now expected in September.

Sophy and her fellow campaigner Barbara Pattinson (of the SE5 Forum) then went to City Hall on Monday to give a slice of the station cake to London Mayor Sadiq Khan. They also planned to offer more cake to officials from TfL and Network Rail, as well as King’s College Hospital and Maudsley Hospital bosses, who emphasised the need for improved transport links to Camberwell.

But the campaigners are still gathering signatures for their online petition, which has now reached 1,868 signatures.