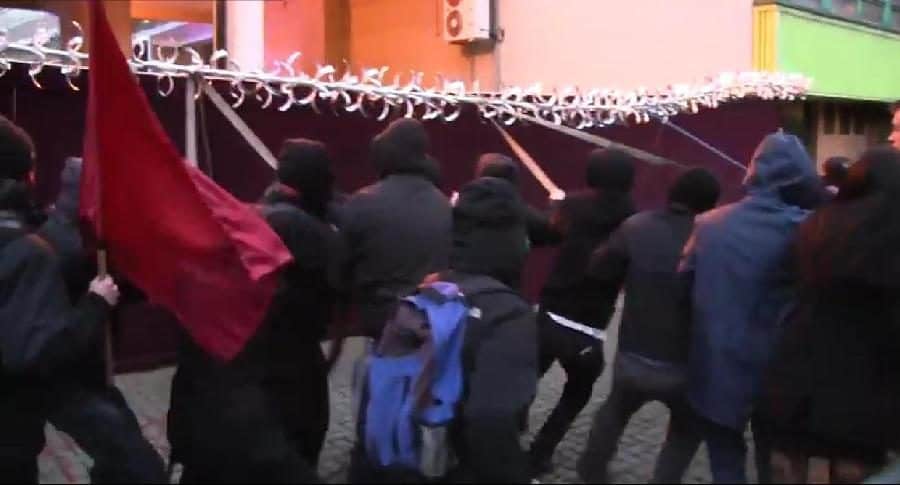 Campaigners pulled down the fences around the Aylesbury estate following a march on April 2.

Cheers went up as more than a hundred campaigners descended on the Aylesbury last week and ripped down the eight foot high security fences enclosing part of the estate.

Residents who do not want to leave their homes joined protesters on a march from Burgess Park on Thursday evening, calling on the council to halt demolition of the social housing blocks.

When the hundred-strong crowd reached Albany Road, where the makeshift walls caused tenants to rename their estate Alcatraz, masked protestors tied ropes around the barbed fences and pulled them down, revealing ranks of baffled security guards behind.

Aysen Dennis, 56, who has been a tenant in Wendover block for 22 years, went on the march and witnessed the fences coming down.

“It felt great,” she said. “It was a great victory that our demo ended with glory. Everybody cheered and kept shouting ‘Repopulate the Aylesbury estate’.

Fellow resident, Victoria Briben, who has lived in Taplow block for 21 years, said many residents on the estate supported the campaigners because they did not want to move from their homes. “I’m panicking about what’s going to happen to me,” said the 53-year-old, who also went on the march.

“It was nice to see these people coming to support us.

“I’m upset by what the council are doing to us. They want to take our homes. The whole thing is very sad, thinking that one day I will have to leave,” she said.

The action came on the same day the council took some of the campaigners to court, to evict those who had been squatting in the Chiltern block as part of the protest.

Councillor Mark Williams, Southwark’s cabinet member for regeneration, planning and transport, said: “Those squatting on the estate weren’t speaking for our residents and were attempting to block the development of the very homes they claim to be campaigning for.”

He declared that the regeneration of the estate including “new high quality homes, open spaces and community facilities” would continue.

In the meantime, Cllr Williams remains adamant that the security fences are needed to keep residents living in half empty blocks safe.

“The fence was put up following requests from the few remaining residents on this first development site, to stop anti social behaviour and keep residents safe,” he said, though residents speaking to the News previously said they were unhappy with the council’s solution to their security fears.

The council repaired the fence over the weekend and says it is still reviewing the access arrangements in light of some frustrations voiced by residents unable to gain access to their properties or receive visitors.

Great to see so many people out on the streets taking direct action against the fences! It’s disgusting – and probably illegal – that Southwark put them up in the first place

Bully boy tactics to get their fancy flats built.
I wonder how many of those fancy flats will be offered (as reasonable rent) to those who live on the Aylesbury estate?