Campaigners met at the Newington Tenants and Residents Hall on Monday, March 3 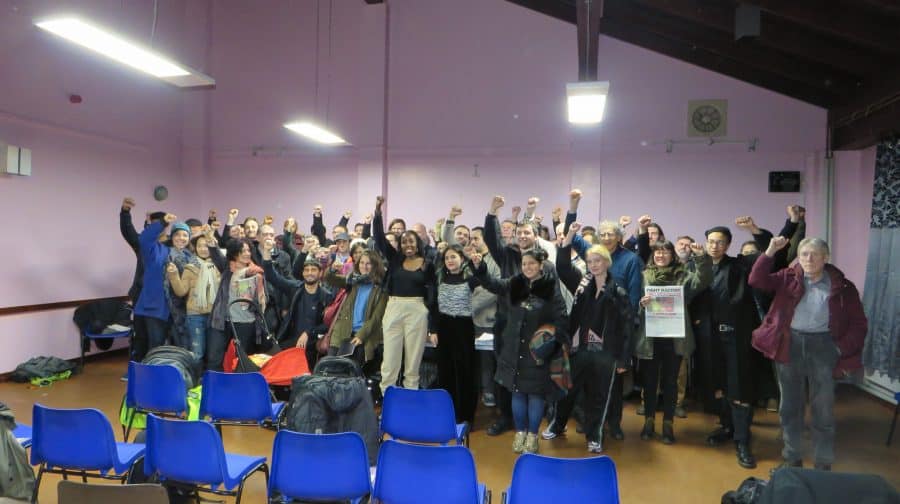 Campaigners have united under the 'Up the Elephant' banner.

Last month the News reported that Delancey had written to Southwark Council chief executive Eleanor Kelly outlining potential concessions, including 116 social rent homes and a box park for displaced traders, after residents objected to proposals during the public consultation.

But campaigners were disappointed when Delancey’s revised formal offer only included 74 homes at social rent. A further 42 are ‘pending resolution of grant funding and/or final viability review’.

At a public meeting held on March 3 at Newington Tenants and Residents Association Hall, groups including Latin Elephant and student activists from University of the Arts, London, vowed to continue applying pressure.

Councillor Maria Linforth-Hall told the News: “Traders have told me that they are not being given personal support to understand the relocation options available to them from Delancey’s multi-lingual employees who have been specially hired to do this.

“Instead, some said they have been referred back to the organisation Tree Shepherd with their enquiries. I am going to Delancey’s showroom this week to find out myself.

“The plans in their current forms still represent wholesale gentrification, with just 74 homes at social rents.

“This is an improvement from 33 out of 979 submitted in the first plans, but less than the 116 Delancey have previously promised.”

On Tuesday, March 3, Delancey sent a new statement to the News:

“We are committed to creating a thriving town centre in Elephant and Castle which will benefit the local and wider community, both now and in the future.

“Since the Planning Committee in January, we have been working hard to listen to the concerns and have had many fruitful conversations with local businesses, the community, Ward Councillors and the London Borough of Southwark to find agreeable and financially viable resolutions to the concerns that were raised.

“We have committed to 35 per cent affordable housing, and have increased the provision of social rented housing units to 74. These new homes will be managed by Southwark Council or another Register Provider.

“We are also looking at ways to increase this to 116 flats. It is anticipated that all of the flats will be delivered for the rental market and will go at least some way towards meeting the Capital’s chronic housing need.

“We appreciate the impact these changes will have on existing businesses in particular and are working hard to engage with traders within the boundary of the planning application.

“We have already progressed a programme of face to face and group meetings with businesses to discuss their relocation options.

“In addition to this, an independent business advisor (Tree Shepherd) has been appointed by the council to advise tenants on business development and support them in planning for the future.

“They have been in operation since August 2017 and can be reached in unit 231 in the Elephant and Castle shopping centre. Tree Shepherd will be available up until a year after the centre has closed.

“We are providing 10 per cent affordable retail in the new development on both the East and West sites of the future town centre.

“We do appreciate that it may not be viable for tenants to relocate when the centre closes and then move back in to the new town centre, instead they may wish to find a new permanent location sooner.

“We have therefore identified locations in the wider area, this includes space at Elephant 1, Elephant Park, Castle Square, Manor Place and Perronet House.

“A full database of these properties is being made available and tours of the alternative sites have been offered to traders.

“We are looking to provide temporary affordable retail space on Castle Square, with priority given to existing independent traders and we are providing a relocation fund of £634,700 for Southwark Council to distribute.

“The Council is also exploring opportunities to direct some of the Community Infrastructure Levy receipts from the scheme towards further assisting traders with relocation costs.”

“We are also in ongoing discussions with the bingo operator regarding the re-provision of a bingo operation within the locality.

“We are also happy to  give first refusal to a bingo operator to lease 20,000 sq ft of leisure space within the scheme which could accommodate circa 1,000 seats depending upon the precise operator.

“We will be continuing to engage over the coming weeks to discuss these proposals to reach a mutually acceptable and positive result for all to provide essential improvements to the transport, education and housing provision for this key London location.

“We would encourage people to get in touch with their views or comments during this period by visiting the Community Engagement Centre (opposite Café Nova in the Shopping Centre) where a Spanish speaker is present.

“The public can also get in touch by emailing  info@elephantandcastletowncentre.co.uk.”

Honestly when I returned to the Elephant for the first time in a few years recently (I’ve just started working in the area) I was expecting to find a ghost town but what I found was a rather busy shopping centre and market, with proper character and thriving community, despite the best efforts of the council and developers to isolate and neglect the centre into the ground. The roundabout reworking is a disaster, it takes ages to get across it and I’m not the only person who misses the underpasses, which were never murky or crime ridden but were full of art and light. I’m quite sure a restoration of the centre is possible – brutalism is coming back into fashion, and demolishing it and the Coronet is increasingly beginning to look like historical vandalism and snobbery.