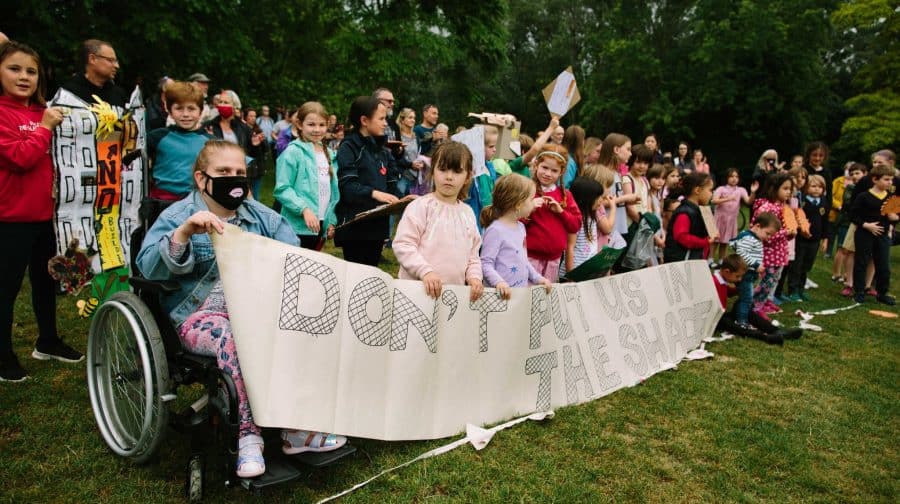 A Rotherhithe pensioner has launched a formal legal battle against part of the Canada Water Masterplan over its “irreversible” impact on nature reserves.

Resident Steve Cornish began the legal action after the final stage of planning permission for British Land’s scheme was granted in May.

It had been unanimously approved by councillors at a marathon planning meeting last year.

More than 100 residents took part in a photo-call in support of the judicial review on Wednesday, at Russia Dock Woodland Green.

“I am a local resident launching a legal challenge against overdevelopment at Canada Water which will have a negative impact on wildlife habitats built up over 35 years, home to many rare species,” said Mr Cornish.

“We are about to lose our green backyard!

“I have consulted widely across the community, with local schools and community organisations, visitors from near and far, local residents and the management of the two Local Nature Reserves, who all support this action.”

Shading from a five and six storey block at the plot, which forms part of the southern boundary of Stave Hill and Russia Dock Woodland, would cause a “devastating impact” on wildlife, claimed Mr Cornish.

Part of the playground of nearby Alfred Salter primary school could also be in darkness at certain times of the year if the block goes ahead, he added.

Other objections include that all flats for the site are social housing – but are also “segregated” from transport links.

This was challenged at a hearing last year, with planning committee chair, Cllr Martin Seaton, saying: “I went to K1 [the plot] last night, and it’s a wonderful location to live, I would’ve thought.”

Up to £30,000 must be raised for the judicial review to be successful, said Mr Cornish. The Masterplan, one of the largest development schemes in Southwark history, will see the transformation of 55 acres of Rotherhithe in a £3.3bn overhaul lasting more than a decade.

“We are aware of a letter before action sent to Southwark Council and have responded to the points raised,” said a British Land spokesperson.

“British Land is continuing to work to ensure the considerable benefits of the Canada Water Masterplan proposals are realised for the community as soon as possible.”