Video: 82-year-old who moved from London over 40 years ago moved to tears by message 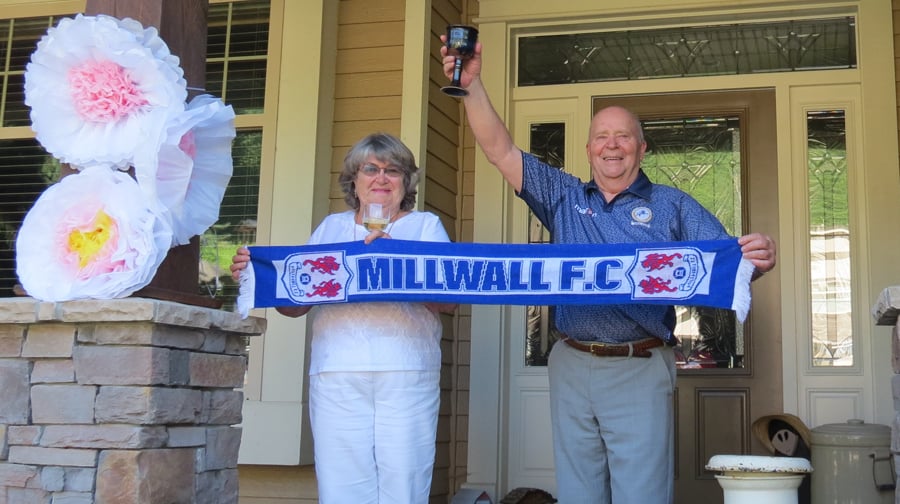 An 82-year-old Millwall fan who has never stopped supporting the team despite living in Canada for over 40 years, received a very special message for his birthday – from Lions manager Neil Harris.

John Duggan was celebrating his big day, which was also the 60th anniversary of his wedding to his wife Anne, at a packed party at his home in Chilliwack, British Columbia, when he was told to sit down for a surprise.

Wearing a shirt featuring the names of Millwall players of the past as well as his own, John then saw Harris pop up on his TV screen. He was moved to tears as the Lions gaffer addressed him and his wife Anne personally.

Harris said in the video: “Just a quick special message to wish John and Ann Duggan a huge congratulations on your 60th wedding anniversary, not just from me the Millwall manager, but from my staff, all the players and everybody at the football club.

“Secondly, John, congratulations on your 82nd birthday. The pair of you, we hope to see you soon at The Den and what an example you both are to a long, happy marriage and the example you set to young couples out there.”

Harris wasn’t the only big name wishing John and his wife well – they also got letters from Canadian PM Justin Trudeau and the Queen! John, who moved to Canada in 1972, was born in Putney, but supported Millwall as his dad, who was born in Tooley Street, Bermondsey in 1901, did.

He went to his first game aged just six, at the Old Den, and remembers that it was standing only, with the children being passed to the front.

He also remembers that trains would sometimes stop on the nearby track to watch the games for a moment.

Both of John’s sons are also Millwall fans, and he went to see the Lions play against the Canadian national team in Vancouver in 2004, wearing a T shirt with ‘Canada’s biggest Millwall fan’ emblazoned across the front.

The News helped arrange the message to be sent to John after being contacted by his family. John’s grandson Ryan Baker said:?“We couldn’t have asked for a better reaction to the video. Even the letters that followed from the Queen and the Canadian Prime Minister couldn’t come close to topping it. Big thanks to Southwark News, Neil Harris and Milwall Football Club for making this happen!”