This story was updated at 7:10pm 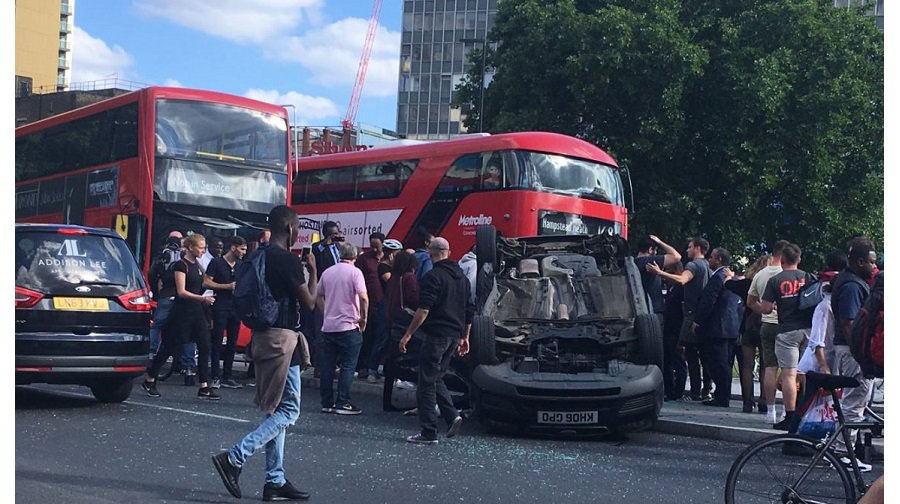 A car has overturned after a collision in Elephant and Castle, shortly after 5pm today.

Two cars were said to have hit each other head-on, beside the northbound exit for Newington Causeway.

The Met Police have confirmed that no one has been injured.

A Met spokesman said: “Officers and the London Fire Brigade attended and discovered an overturned car.

“There were no reported injuries. Road closures remain in place.”

Transport for London has confirmed via Twitter that restrictions are in place at the junctions with New Kent Road and Newington Causeway.

Elephant & Castle – restrictions in place on the northern section of the roundabout. No entry into A201 New Kent Rd. (Collision). Delays.

An eyewitness, Richard Reynolds, of Perronet House, told the News one of the cars had hit the blind curb in the centre of the junction’s northern half, which was installed as part of the junction’s 2015/16 redesign.

“[The curbs] get driven into all of the time. It’s such a ridiculous design,” Richard said.

“[The new junction] is so obviously a bad design. This is the third crash to happen here recently, and it’s happened again in perfect driving conditions, in the middle of summer. Unless there is of course something just fundamentally wrong it.”

This evening’s collision on the junction is the third to have taken place in less than four weeks.

On July 13, at about 5am, a van drove into the central reservation which divides north and southbound traffic, adjacent to the Tabernacle. Police said the driver’s injuries were not-life threatening.

Another collision at the junction, involving a man in his seventies and a lorry, was reported by the SE1-London website on June 26 at 2:20pm.