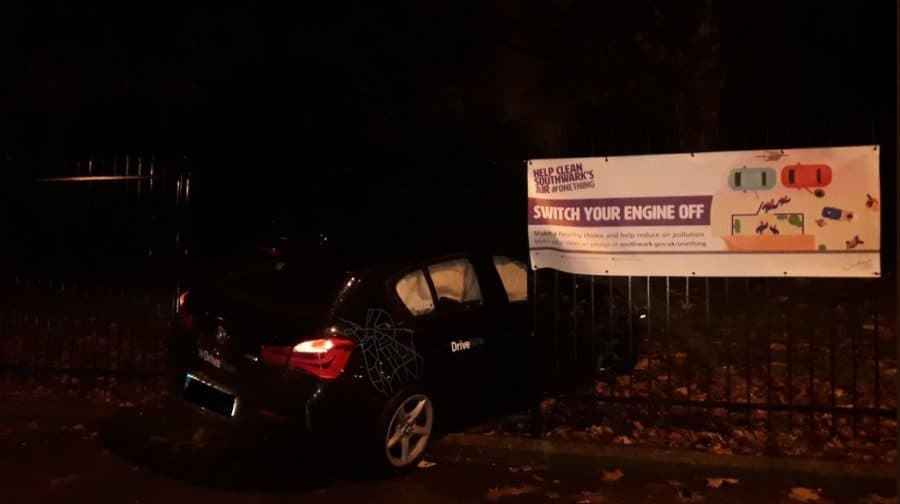 A car dramatically smashed into the railings of Southwark Park in the early hours of this morning after its driver ‘failed to pull-over’ for police.

Police had attempted to stop the motorist, believed to have been driving a ‘Drive-Now’ hire car, on Jamaica Road close to the Rotherhithe Tunnel at around 12:40am, this morning (Wednesday November 21).

But the police said the driver failed to stop and then collided with a second car, a white minicab.

The collision left the car crashing through the railings of Southwark Park – next to a sign saying ‘Turn your engine off.’

A police spokesperson told the News that the motorist fled from the scene on foot.

However, police said the car was not been actively pursued at the time of the stop. The white minicab was badly damaged in the collision but its occupants were not hurt said police (Image: Danny Davies)

No-one was reported injured in the smash and police said that their enquiries were continuing.

There have no arrests.

The News asked the hire company, Drive-Now, if it was aware of the incident, but it was unable to give comment without a vehicle registration number.

It is not the first crash on Jamaica Road this month.

On Friday (November 16) a teenager was rushed to hospital with non life-threatening injuries in a collision on the road.

Meanwhile on Saturday November 10, a traffic police vehicle crashed into the traffic lights on the road’s junction, putting them temporarily out of action.