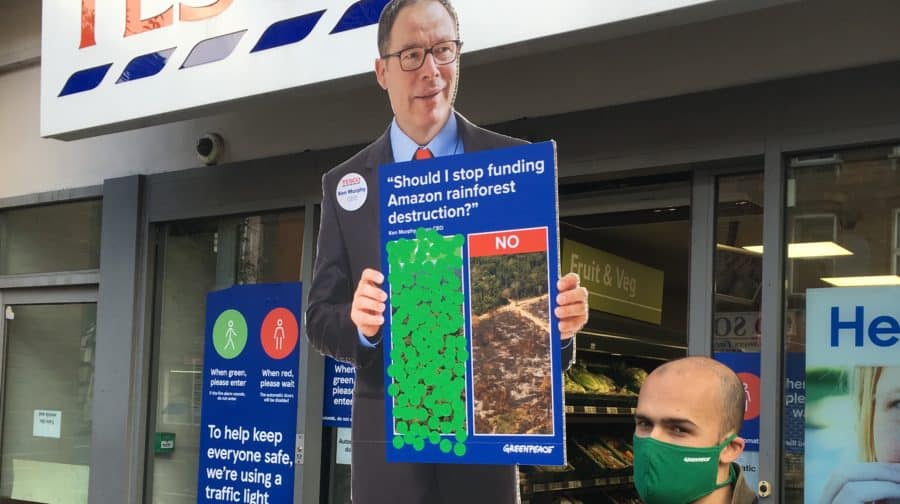 Armed with a life size cardboard cut-out of Tesco’s CEO, Peckham-based Greenpeace volunteers called for the supermarket giant to cut ties with companies that cause deforestation last Saturday.

They equipped the cut-out of CEO Ken Murphy with a sign asking the question “Should I stop funding Amazon rainforest destruction?”

In a poll of over 120 people surveyed on Saturday, October 30, 100 per cent unanimously voted that Tesco must ‘stop funding Amazon rainforest destruction’.

Stef, a Greenpeace volunteer from Bermondsey, said: “Shoppers know that anything less than a plan for meat reduction is just chicken feed and won’t fix our forests, stabilise our climate or give customers the option to make affordable, healthy choices that don’t harm our planet.

“The public are more informed than ever on environmental issues, particularly with the UK hosting COP26 this month, and the general consensus seems to be that big corporations like Tesco have a responsibility to work towards a greener future.

“Instead of coming out with meaningless, greenwashing pledges, Tesco should face up to the fact that meat it sells is contributing to the destruction of the Amazon and other vital ecosystems across Brazil, which is threatening Indigenous Peoples, pushing wildlife to the brink of extinction and exacerbating the climate crisis.

“Southwark Greenpeace will keep bringing the message that Tesco meat = deforestation directly to its stores until the UK’s largest supermarket lives up to its promise to remove deforestation from its supply chain.” 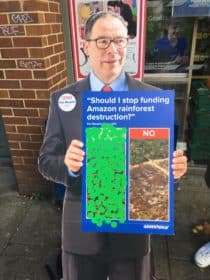 Over the last year similar protests have been held at nearly one thousand of Tesco’s almost three thousand stores across the UK, with many more visits planned in the coming weeks.

The protestors argue that Tesco buys British chicken and pork from suppliers owned by JBS, a company which recently admitted it would accept deforestation in its supply chain for another fourteen years.

A Tesco spokesperson said: “We know setting fires to clear land for crops or grazing is destroying precious habitats like the Brazilian rainforest, and that it must stop. That’s why we have worked alongside Greenpeace on the issue of deforestation in the Amazon over many years and we are committed to doing more, both directly and as part of a national and industry level solution.

“We do not sell any Brazilian meat (beef, chicken or pork) due to concerns about deforestation. In early 2018 we became the first UK supermarket to remove Brazilian beef from sale.

“We have called for our government to mandate food companies, as part of its National Food Strategy, to introduce effective due diligence across supply chains to make sure all food sold in the UK is deforestation-free.”