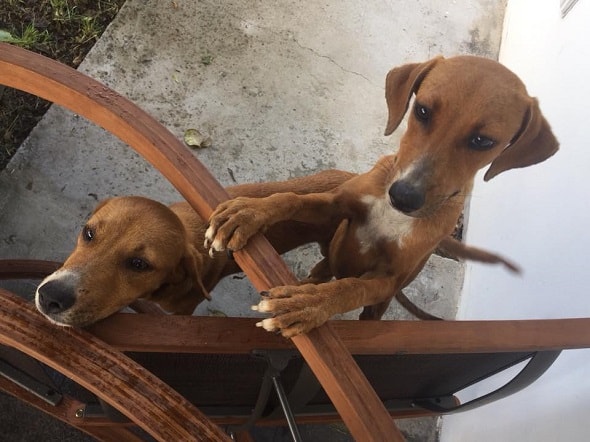 Ziggy and Star are thriving in their East Dulwich home

Two dogs rescued after Hurricane Irma wreaked devastation in the Caribbean have found their forever home in East Dulwich.

Ziggy and Star were seen wandering on the island of Antigua in December, alone and hungry by the side of the road, months after last year’s hurricane.

Star was described as ‘a wreck’ who was thought to be close to death as she could barely stand.

Both dogs were so thin their rescuers were too distressed to photograph their pitiful condition. But now they are thriving after being rehomed with Loraine Rutt and her husband Steve Tomkinson, with support from TV vet Rory Cowlam, who appears on CBBC’s ‘The Pets Factor’.

After giving the dogs a routine check-up last week, Mr Cowlam told the News: “It’s amazing how loving the two of them are after everything they’ve been through.

“They are looking healthier every time I see them. They are going to be awesome pets for two truly incredible owners.”

Ms Rutt, who has lived in Peckham and East Dulwich for 30 years, explained: “Both our previous dogs, who passed away a couple of years ago, were rescue dogs. I had intended to rehome from Battersea or Dogs Trust this January.

“My sister, who lives on St Maarten, another Caribbean island hit hard by the hurricane, sent me a photo with the caption ‘This brother and sister need a home’ and my heart melted.

“A woman named Andrea, who had taken the dogs in and fostered them on Antigua, was putting out a plea on Facebook for help finding them a safe new home.

“One of the dogs, Star, wouldn’t have made it if a couple from Manchester, who first spotted them, hadn’t driven 45 minutes out of their way every day on their holiday to feed them.

“Knowing what my sister had gone through with Hurricane Irma I felt compelled to help.

“The house my sister was sheltering in with three other people, four dogs, and two cats, was blown apart by the hurricane. It lost the roof early on and they all huddled on the bathroom floor under a rug for eight hours, being battered by 180-mile-an-hour winds.

“I can’t imagine how these pups, who would have been six months old, managed to survive outside.

“The dogs are adorable, and they love everyone, and my husband Steve and I can’t believe our luck.

“They’re really bright, and have settled in amazingly well, though they weren’t big fans of the snow!

“Unsurprisingly, they do have a bit of post-traumatic stress. When the wind picks up Star sits and trembles.

“The paperwork to bring them over was similar to pet passport, but had to be done locally.

“We are so grateful to Andrea who fostered them and did all the necessary veterinary stuff and generously sponsored a big chunk of the transport costs.  The local charity Dogs and Cats of Antigua were also really generous.

“They usually rehome to USA and Canada, but helped with the flight crates and also a chunk of the flight costs.

“When we picked them up at Gatwick’s animal reception they greeted us like long lost friends, it was amazing.

“We now realise they greet everyone the same way – especially Rory!