'This was an atrocious attack on a lone woman' 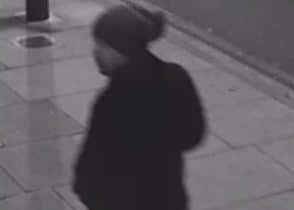 Do you recognise this man?

One year after a woman was raped in Kennington Gardens police are reissuing their appeal.

The woman was targeted by the unknown man who approached her while she was walking in Kennington Park Road on December 29 last year between 2-2.20am.

The victim, who was in her 20s, suffered a head injury during the horrific assault.

Although images of a man captured on CCTV at the time of the incident were subsequently circulated by police and this newspaper, he has not been identified.

DC Gerard Collier Smith, of the Central South Safeguarding Command Unit, said: “This was an atrocious attack on a lone woman who was targeted late at night and subjected to sexual violence.

“One year on, we still need the public’s help to find this attacker. If you recognise the man in the pictures we have released with this appeal, please come forward and speak to us.

“If you have any information, no matter how insignificant it may seem, it is vital you get in touch. It could lead to a dangerous man being taken off the streets.”

The suspect is described as black, and wearing a dark, three-quarter length coat.

Any witnesses or anyone with any information is asked to call police on 101 or tweet @MetCC.